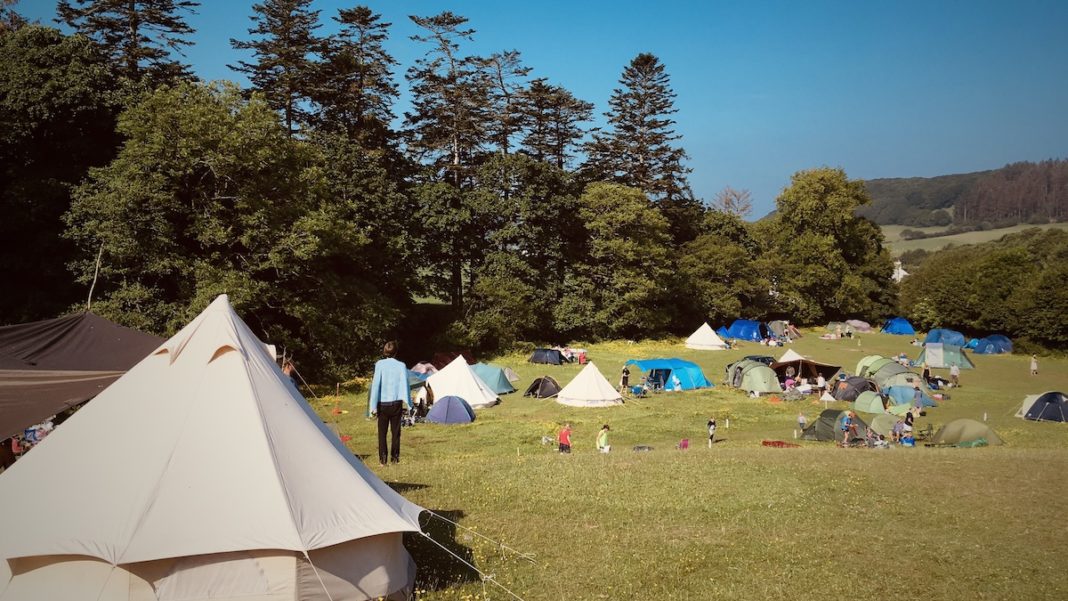 When you roll up to an old time festival, you know you aren’t checking into the Presidential Suite at the Ritz. It’s going to be crowded and noisy and dirty, and some of the normal rules for polite human interaction will be suspended for the duration. But some aggressions must not stand. Here’s a checklist of the charmers you’ll encounter sometime this summer.

You’ve had that spot for the last ten years. This whole region of the campground is unofficially named after you. Everyone knows that. Now this guy rolls up and takes it because he got in line before you? Unacceptable. Put your tent up right next to his, glare at him, don’t speak, and play loudly until the early hours. Next year, arrive a week early and sleep in your car at the festival gate.

The tune’s over. Time for another? Oh no. Hank the Historian will be holding forth now. Often aided by Curious Cameron, who doesn’t know any better than to make eye contact, Hank will tell you who recorded the tune originally, when, in what studio, with what other musicians, and will then explore the eighteen historical variants of the original in chronological order, along with suggestions for improving the six versions in the Milliner Koken book.

It’s Friday afternoon! You’re finally off work and roll into the festival, only to find the whole place looks like a refugee camp because Tina offered to “save spaces” for everyone in Durnsville, leaving you a six-foot wide shadeless strip next to the Porta-Johns for your tent. Most of the tarps will still be there Sunday morning as you drive out, sunburnt and poisoned.

Arrives at a weeklong festival with three beers and a half loaf of bread. Warning sign: carries a tin plate in his fiddle case. Somehow manages to be first in line wherever free food and alcohol are available: potlucks, cd release parties, your dinner. Will stare shamelessly and hungrily at your leftovers until simple humanity forces you to feed him.

These guys arrive in a caravan of black SUVs with tinted windows, set up a walled jam tent, and never leave it. Do they have a bathroom in there? What do they eat? It’s a great jam, but none must enter their sacred enclosure. If you pull the tent flap aside and let in direct sunlight, each will vanish, screaming, in a ball of flame and smoke.

You return from the showers; your campground is bare. You spend the next three days finding your chairs in other people’s camps, in tree branches, at the bottom of snake-filled sunless ravines, and once, I swear, in the showers.

You knew you were in trouble when he set up an industrial-grade restaurant kitchen complete with Viking Range, a set of Ginsu knives, and twenty Williams Sonoma copper pots hanging from the tent poles. Top Chef Tom will spend about ten hours a day cooking gourmet meals; the scent of slow-cooked ribs, garlic butter kohlrabi, fresh tomatoes, and hot brownies with ice cream wafts over your campsite as you choke down the peanut butter sandwiches and granola bars you brought. Grand seated candlelight gatherings occur three times a day, with what appear to be waitstaff and a sommelier. You watch like some filthy medieval peasant praying for a scrap to fall from Lord Butthole’s buffet.

She staked her tent up inches from yours. You get to spend the rest of the festival listening to her fart and snore. If she’s awake, she’s happy to discuss her gluten allergies, her thoughts on vaccinations, the shape of the earth, and the Reptilian Conspiracy with all passersby. Really, really loudly.

A weekend away from the wife? In the great outdoors? What better time to smoke that smelly box of giant stogies you bought in Tampa last year? I’m sure none of the several hundred people downwind will mind at all. Why not invite a few other asshats to share?

Krusty Krissie will be sleeping in a mud puddle down in the festival low ground. Because her clothes are made from discarded tires and her dreadlocks appear to have been molded from the contents of a pet groomer’s vacuum cleaner, she won’t be needing the showers much. Beware the cloud of toxic dust that follows her through the campground. Her puppy on a rope will poop under your camp table. She will not notice.

You can’t unsee this. For the sake of the children, someone loan Sean a towel.

*Note: This article is intended for humorous purpose only and is not intended for the prevention of pregnancy or disease. Any resemblance to you or anyone you know is purely coincidental.