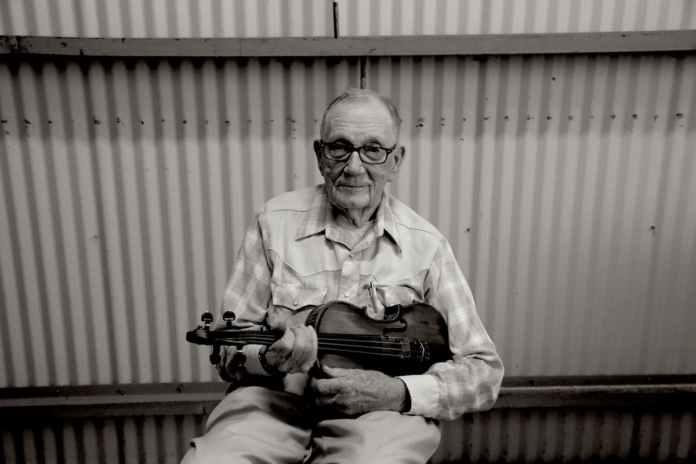 I spent 1973 on the small island of Adak, Alaska as a communications operator for the U.S. Navy. A buddy of mine bought a copy of the Nitty Gritty Dirt Band’s “Will the Circle Be Unbroken” recording; he liked the cover photograph but hated the music and he gave me the record. That is when I began my journey into the world of old time, bluegrass and lots of other traditional music. Thank you very much Sam Doman!

Fast forward to 2001 when the state folk-arts coordinator of South Dakota called me and encouraged me to apply for a grant to study fiddling with a master of my choice. Most of the old time fiddlers in South Dakota were gone and I had thought of Dwight Lamb of Onawa, Iowa. Bob Bovee and Gail Heil had been suggesting to me that I should get together with Dwight. I called Dwight on the phone and he agreed to take me on as an apprentice; we applied for the grant and got it. Dwight and I still play music together and I have been traveling with him to festivals all over the country and to Denmark several times.

Rounder Records had a series called North American Traditions which featured fiddle music from the United States and Canada. Mark Wilson recognized that Dwight had a storehouse of fiddle tunes of the Midwest and he made several trips to Onawa to record Dwight. The first release by Dwight was called “Joseph Won a Coated Fiddle” and had tunes in the Missouri Valley style of fiddling and a handful of Danish tunes that Dwight had learned from his maternal grandfather on the single row accordion.

Mark also knew that Dwight had a huge collection of home recordings of Bob Walters, Cyril Stinnett, and several other fiddlers in the Missouri Valley style, and so plans were made to release of double CD of Bob Walters. The artwork was done, the tunes had been chosen, and remastered for release, but before the CD could be finished, Rounder decided to discontinue the “North American Traditions” series.  Dwight and I decided to release it on our own, with the permission of Mark and Rounder Records, and we formed the Missouri Valley Music Label. We received a generous grant from the Bush Foundation in Minnesota and were able the finish the project in 2009. We have a book of Dwight’s Danish tunes, a DVD of Cyril Stinnett, and reissue of Dwight’s two vinyl LPs, and more on our label.

We hope to have more of Dwight’s field recordings available for downloading from our website, with help from our tech wizard, David Cavins of Columbia, Missouri. Dwight has a huge collection of home recordings and I am amazed whenever I go see him that he has another recording of a fiddler for me to listen to.

Since 2001 I have made approximately 250 trips to see him (one way is about 110 miles) and I have also traveled with him to Denmark five times, to the Festival of American Fiddle Tunes twice, to the International Accordion Festival in San Antonio, to Breaking Up Winter at the Cedars of Lebanon in Tennessee, and to Washington, DC for the awarding of his National Fellowship Award from the National Endowment for the Arts.

We have performed together at the Minnesota Old Time and Bluegrass Festival, the Sioux River Folk Festival and have done dozens of concerts and dances at small venues throughout the Midwest. Dwight has a great love of fiddle music and is very willing to share his music in his efforts to keep his Missouri Valley and Danish tunes alive and kicking!!

Check out all the great recordings from Missouri Valley Music here.

Feature photo taken by David Bragger at the Festival of American Fiddle Tunes.