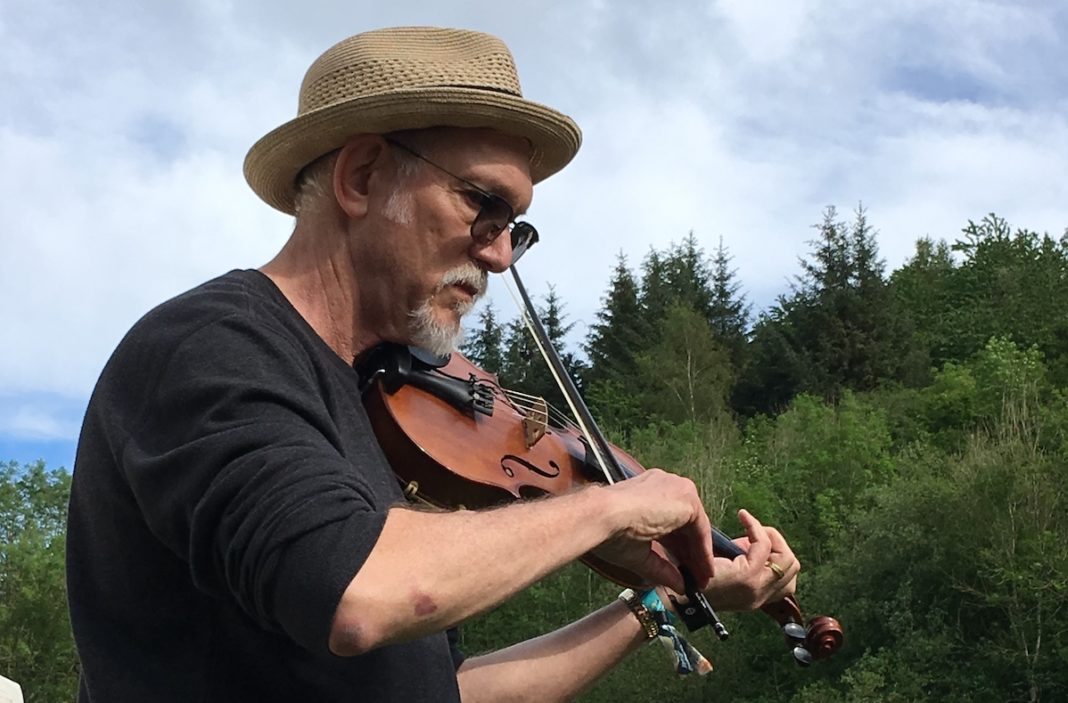 When I heard that Bruce Molsky was going to be playing with Molsky’s Mountain Drifters at the 2019 Fire in the Mountain in rural Wales – a wonderful festival I’ve visited for several years in a row – I reached out to see if he’d be willing to sit down for a video interview. Bruce was most obliging, but in the end time constraints and the craziness of the festival meant we had to take a rain check. Instead, Bruce offered to write some of his thoughts to a few questions I had prepared. As one of the most respected members of today’s oldtime community, I’m sure you’ll read with as much interest as I did.

Over your career you’ve dedicated a lot of your time to teaching, to playing with young musicians. Could you talk about how that came about?

Well, I started with all of this when I was young! I’ve never forgotten what moved me. First and foremost was the music itself, but then I discovered the community of other folks surrounding it, and it became as much a lifestyle as anything. I see that in my younger colleagues and students these days. They hang and play way late into the night and share tunes and the joy of all of it. Having an instrument in my hand was always the default mode. When I wasn’t doing it, I was thinking about it, and all those tunes and songs. Being around younger players recharges my batteries with that feeling. Plus it’s so great to see them take this music and own it for themselves; that’s what will keep it moving and evolving, the way it always has.

There seems to be an endless debate in the oldtime community around issues of tradition vs innovation. One side promotes we “slavishly imitate the masters” while the other argues that folk traditions have always been free and dynamic and should remain so today. I wonder how your thinking about this topic has changed over time?

I think the divide between those two camps has thankfully softened a bit recently. When I first discovered old-time music, it seemed to be cloaked in some kind of romance, real or imagined, that I yearned for and wanted to get close to, especially coming from outside the mountain culture myself. I thought I could get to that place if I listened so closely, beyond just the notes, and really tried to crawl inside some magical spot beyond the music. I imitated my heroes just as closely as I could for a long time and avoided taking liberties with something I thought was finite and unchangeable.

But now all this time later, I don’t feel that slavish imitation serves anyone beyond the goal of detailed learning and paying respect to the sources (both requirements of doing anything well). The old players I was lucky enough to meet had deep respect for their teachers and heroes, but none that I know of set out to be exactly like them. Each had their own unique voice, but you could hear their influences too. In my own playing, I constantly reference other players and think consciously about that as I go through a piece. But trying to sound exactly like any of them just doesn’t make sense.

A friend jokingly suggested I ask, “When will Satan claim the soul you traded in exchange for your musical gifts?” At more serious level, though, I wonder what you think separates good musicians from great ones? Or are those even terms that make sense to you?

“Good” and “great” and the comparison between them are judgements. There are players I think of as good or great, but what I really listen for is the particular things in their performances that are unique or well-executed or have great expression, and then how they fit that all together. Those details are what make a great musical voice, be it cool rhythms (Bill Stepp), personal tone (J.P. Fraley, Lily May Ledford), bluesy or otherwise altered intonation (Edden Hammons, Fred Cockerham), laser sharp articulation and phrasing (Clark Kessinger, Doc Roberts). The list goes on and on.

As a player, it’s hard to disengage from listening for new things to add to my own toolbox, and sometimes hard to just listen for the sheer joy of it. It’s kind of a curse in a way, but a curse worth being cursed with. To counter that for myself, I listen to a lot of styles of music that I don’t play, and just let that wash over me. As a touring musician who spends a lot of time traveling, there’s time for that, and it can be inspiring.

In the grand scheme of life there are so many things to do, so many kinds of music even we can explore, so why spend so much time on oldtime? What’s special about oldtime or the community that keeps you coming back?

I’ve made lifelong friends through old-time music. I met my wife Audrey through this music scene. The love and the feeling of solid ground goes way beyond the music itself for me. You asked earlier about my interest in young people playing this music, and seeing them dig into it and with the same enthusiasm makes it that much better.

What for you are the most valuable experiences playing oldtime? What do you have the most fun with these days?

These days, it’s my trio Molsky’s Mountain Drifters. Allison de Groot and Stash Wyslouch are strong musical partners and good friends, and I feel lifted up every time we play together. Also there are the collaborations outside the old-time music “box” that allow me to try that language in other styles. I’ve been working with the great Shetland fiddler Aly Bain and Swedish icon Ale Möller in a trio for some years (we’re touring the UK this fall), and that confluence of styles is super-exciting. Also did a project with Norwegian hardanger maestro Ånon Egeland and Finnish fiddler Arto Järvelä which resulted in a fun CD. Touring with Ellika Frisell and the great Senegalese kora player Solo Cisshoko was life-changing. We lost Solo recently, and he is missed deeply. And it was recording and performing with the great hardanger innovator Annbjørg Lien that helped me to first see a lot of those cross-cultural possibilities.

Closer to home, Tony Trischka and I have been exploring common ground between old-time and bluegrass and the great stuff he writes. Darol Anger is a true musical hero and was one of the first to muscle me into expanding my horizons and to try new musical things. Then there’s Brittany and Natalie Haas, Tatiana Hargreaves. All of it just makes me feel as rich and lucky as anyone could be.

When you’re not on the road or teaching what do you do to take a break from it all? I understand you’re into collecting and restoring fountain pens?

Yes, we talked about fountain pens when we met in Wales! That’s been a long-standing hobby. I love the ritual and the feeling of writing with a fountain pen, in cursive. I write an occasional newsletter (it does go out via email) and wrote the last one by hand and scanned it in. Kind of crazy but it just felt good. I’d have written the answers to your interview questions that same way if there was time!

Besides that, cooking good food and baking good bread are pretty serious pastimes. Keeping up with and participating in government and politics is our responsibility these days (and always), and I try to stay as active and informed as I can. And I can never get very far from music, it’s always right there on the surface of everything.