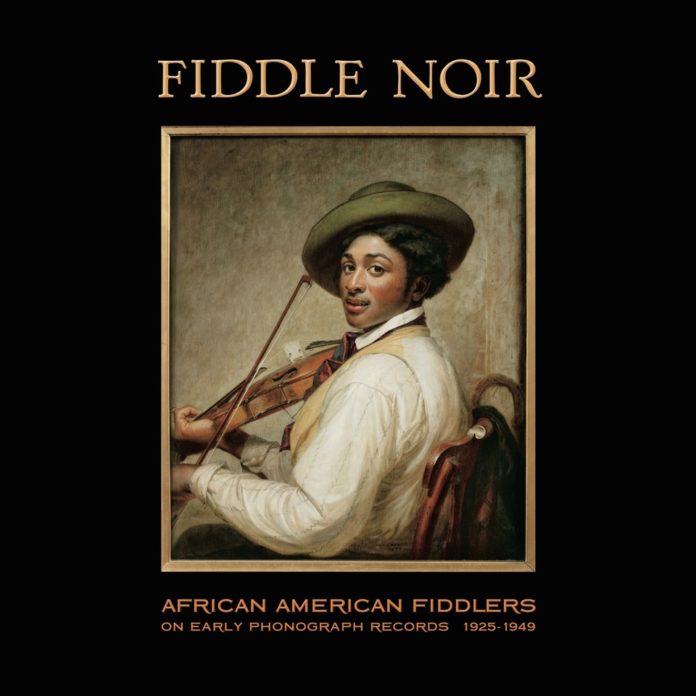 Fiddle Noir represents an incredibly important contribution to the discography of traditional music. The vast majority of exploration into the acoustic music of Black people has focused on the guitar and the banjo. Documentary evidence gathered and presented by Dena J. Epstein and Karen Linn in their respective books, Sinful Tunes and Spirituals and That Half-Barbaric Twang, indicates that fiddlers were far more common than banjo players in early African American communities (guitar being somewhat of a rarity until the early 1900’s). Fiddle Noir is the most significant sonic exploration into the Black fiddle tradition to date. While other compilations of Black fiddlers do exist, none draws upon such a wide array of styles and locales. Fans of old-time, jug band, blues and jazz repertoire will all enjoy this record.

While most reviews employ the terms “record” and “album” liberally, they really do apply in this case; Fiddle Noir is exclusively available as a vinyl LP. As I struggled to resuscitate my father’s 41-year-old turntable so that I could write this review, I contemplated the album’s liner notes. They tell the story of early Black fiddlers who were boxed out of an early record industry that viewed their work as unprofitable due to their race. The tale casts an odd light on Old Hat’s choice to confine the music to an archaic and cost-prohibitive medium. It’s a sad irony that most Black fiddlers were unable to make records like this one in the 1920’s and 1930’s, and that most of today’s Black people will be unable to listen to the record now that it exists. I hope that Old Hat will relent in time, and make this superb collection more accessible to the tradition’s Black and working-class inheritors.

The presentation of the album itself is lovely. The cover features a portrait by William Sidney Mount, whom banjo history aficionados may know as the painter of The Banjo Player. The text complements the portrait frame, and the black background gives the image space to speak for itself. The liner notes are detailed and well-researched, and tell fascinating stories.

The James Cole String Band’s rendition of Bill Cheatem will provide an easy, upbeat point of entry for old-time enthusiasts. The instrumentation sets the recording apart in some ways from most old-time string bands of the era: it features fiddle, guitar, bass and mandolin. The opening number aptly demonstrates the commonalities between early blues and old-time styles that this compilation explores. The second track, Neck Bone Blues, is the first curveball Fiddle Noir throws at the listener. Most listeners would be familiar with the type of early blues and jazz exemplified by rag and jug ensembles, but Tennessee guitarist Jack Kelly has a style more reminiscent of Delta blues. Fiddler Will Batts has an elegant style, but isn’t afraid to attack his instrument when the moment calls for it (a heavy bow arm and wild double stops being his weapons of choice). The third and fourth tracks, Fattenin’ Frogs and Steel String Blues (by the Mobile Strugglers and the Instrumental Trio, respectively) feature incredible interaction between ensemble members. The Mobile Strugglers’ twin fiddles are perfectly in tune and perfectly out at all the right moments. The Instrumental Trio weaves slide guitar and fiddle together in a complementary, but never redundant fashion. The State Street Boys’ rendition of midnight special incorporates the antiphonal (call-and-response) voice parts for which Black music is so well-known. The vocalists’ unflinching use of unison hearkens back to an earlier set of harmonic conventions in Black music. The penultimate track of side A is Macon Ed and Tampa Joe’s Warm Wipe Stomp. Although it has the grossest name in the history of traditional music, the piece has more than enough energy to compensate.  Eddie Anthony uses slides and blue notes to greater effect than any fiddler I’ve heard before. The final track on side A is our next curveball: Eva Parker’s I Seen My Pretty Papa Standing On A Hill. While it falls somewhere in the region of jazz or blues, the long shadow of classical music certainly falls on the piece, and it makes for a stately exit from the first half of the record.

Peg Leg Howell’s Rolling Mill Blues eases us into the B side with a gorgeous, long introduction. Ollie Griffin’s violin part is notable for a strong vibrato. The Memphis Jug Band heats things up on the second track: My Business Ain’t Right. Although the jug is perhaps a bit more prominent in the mix than it needs to be (old recordings being what they are), this cut will certainly snap the listener out of their Eva Parker-induced trance. Andrew and Jim Baxter follow it up with a typically relaxed guitar-fiddle duo, featuring great bass runs in the guitar and great use of tone color by the fiddler. Up next is my personal favorite track: Forked Deer, by Taylor’s Kentucky Boys. Never before have I felt tempted to sit down and learn a version of Forked Deer, but the day has come. Fiddler Jim Booker has a clean fiddle style that is notey, but also highly rhythmic and syncopated. Marion Underwood may well be my new favorite fingerstyle banjo player (he uses both two- and three-finger technique over the course of the track). Guitarist Willie Young rounds out the sound for a full three-piece string band that recalls a flashier version of Murph Gribble, John Lusk and Albert York. This band will be particularly notable for anyone interested in the roots of bluegrass; they are certainly present here. The next track, Atlanta Town, also hints at a nascent musical form of the 20th century: the guitar part foreshadows the coming of rock and roll. The fiddler has an interesting approach, alternating between periods of long, sweeping bow strokes with notey, acrobatic runs. Next is That’s It, by Walter Jacobs and the Carter Brothers. This song features a great minor-major modulation that gives it an intense, mournful feel. The final track, I’ll Play My Harp In Beulah Land, uses antiphonal vocals and tight, high fiddle harmonies to close on a cheerful note.

All told, Fiddle Noir is a diverse and exciting compilation that will have plenty to offer any fan of American traditional music. I heartily recommend it to anyone interested in blues, jazz, old-time, or Black music broadly. This record is a great contribution to the world’s musical resources, and I look forward to seeing what we all learn from it.