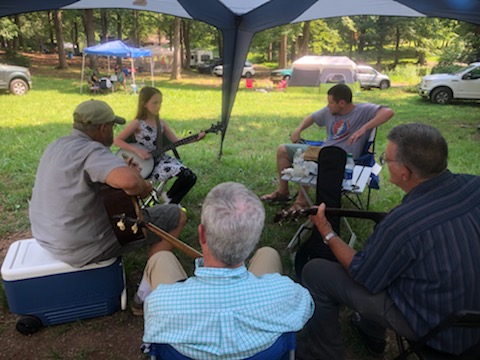 In May of this year I was living in Charlotte, North Carolina.  Now I was born and raised in Western Kentucky and knew the festival scene in that area, and I had been to big-name festivals like Clifftop, but I figured since I was living so close to the mountains I should try to find a few festivals with a bit more regional flair.  After taking out the Oldtime Central Festival Guide and doing a little research, I stumbled upon a festival not too far from my stomping grounds in the Carolina Piedmont.  It was in Union Grove, North Carolina, and it was called Fiddler’s Grove. It sounded pretty promising, so I called up a buddy and made plans to head up there on Memorial Day weekend in May, which fit into my schedule nicely, being just a couple of weekends before Mount Airy.

I went into Fiddler’s Grove cold.  I always find that the best way for me to experience a new festival is not have any preconceived notions going in, so I decided not to do anything more than superficial research, like where to drive to and whether there was camping.  Luckily for me, both pieces of information were in the Festival Guide, so I didn’t even have to look much further! After arriving and paying our entrance fee, myself and my travel buddy, Edwin, immediately found a pretty sweet camping spot right next to a small pond.  It was a great place to pitch a tent (or it would have been, if we hadn’t forgotten our tent at home. But that’s not important right now), string up a hammock, crack open a beverage, and hunker down for some tunes. You know, festival mode. And even though I went in knowing nothing about the festival, it wasn’t long before the regulars came by our camp to let us know what Fiddler’s Grove was all about.

What is Fiddler’s Grove?

Fiddler’s Grove is, as I found out, the longest-running oldtime music festival in the country.  It started almost a hundred years ago in 1924 as the Union Grove Fiddlers Convention, and it ran out of a schoolhouse in the town until 1969.  The founder’s son, who was also a fiddler, took over in 1970 and continued the festival in its current location in Fiddler’s Grove campground as the Ole Time Fiddler’s and Bluegrass Festival.  The history is so rich that it even has its own PBS documentary, which can be found here.

The campground itself is a good size, bounded by a fence on one end and a small copse of trees on the other.  There’s room for RV camping, as well as a small body of water surrounded by trees on the other for rugged tent campers (or car-sleepers) like us.

As far as activities, it’s the typical festival fare.  There are vendors, mostly local, selling instruments, food, and crafts.  There are some jams happening in the camping area. The centerpiece of the festival is the various competitions: Banjo, Guitar, Oldtime Fiddle, Bluegrass Fiddle, Bass, Mandolin, Band, and “hot licks”, all in Senior and Junior.  At the end of the festival, the tradition is that the winners of the Senior and Junior Fiddle competitions compete to be the “Fiddler of the Festival”. I tried my hand at the competition myself, and even placed in the Oldtime fiddle competition.

There was a lot to like.  The campground was a beautiful backdrop to the whole event, and our campsite itself was top-notch.  I also enjoyed hearing the various bands playing on stage. I have a special place in my heart for Bluegrass and Gospel Music, and there was plenty of that to go around from the performing bands playing on the stage in the evenings.  I appreciated the laid-back feel, and it was a pretty relaxing way to spend a weekend. There was no stress about having to be at a certain place, having “play dates” with my friends

I also appreciated the family atmosphere.  It seemed like there were several families at Fiddler’s Grove who had been coming there for generations, and it was great to see kids playing with parents and grandparents, and young and old players interacting effortlessly.  It’s a great sign of a living tradition when it’s actually being passed on to younger generations.

I also like placing in a competition, if you couldn’t tell.

All that being said, my favorite thing to do was to sit at campsites and jam.  Part of the relaxing atmosphere came from the fact that there were so few people there jamming.  While it was mostly me and Edwin sitting at our tent jamming together, we did meet a guitar player from the West Coast who had ALSO found Fiddler’s Grove through the OTC Festival Guide, so that was pretty cool.  There were also one or two jams going on during the day, but it wasn’t quite enough to feed my need for music-making at festivals.

The entrance fee was also a bit stiff, at $25 dollars a head for the weekend with a per-day camping fee on top of that.  By comparison, Mount Airy cost me $20 for the weekend, and I got ten dollars refunded if I played in the contest. The low attendance may be why they have to charge the higher ticket prices, but it seems like it may be a vicious cycle of raising ticket prices due to falling attendance, which then drives people who don’t have as much money away from the festival.

Fiddler’s Grove was a great experience, and I’m glad that I went.  The atmosphere was great, and I think that the framework for a really great festival is there.  If they could find a way to get their attendance numbers up, I think that it would be a must-hit on the summer festival list.  I’m hopeful that they’ll figure something out, and i look forward to hearing about other festival-goers’ experiences in Fiddler’s Grove.

Have you ever been to Fiddler’s Grove?  Have any stories or experiences you’d like to share?  Let us know in the comments!