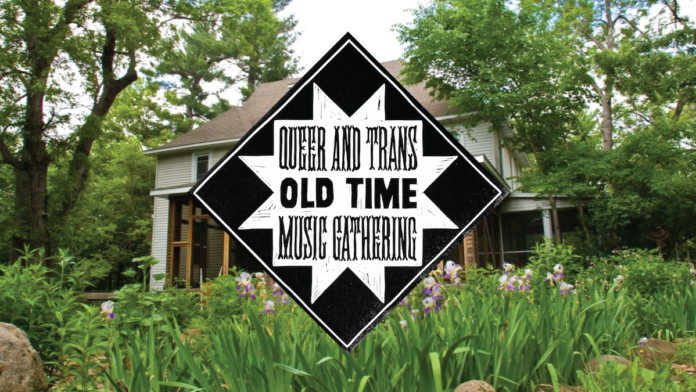 When Clive North and Willi Carlisle talk about the First Annual Queer and Trans Oldtime Music Gathering, it’s easy to see this event has the potential to be something really powerful.

It’s also personal. Clive spent years in the oldtime community hiding his identity as a queer and trans person. After meeting and bonding with fellow queer musician and performer Willi Carlisle, the two started planning what is now the Queer and Trans Oldtime Music Gathering.

The Buttermilk Falls CSA and Folk School, located about an hour from Minneapolis, will be home to the gathering May 8-10, 2020. Clive and Willi took some time to talk about the event, explaining what they hope to achieve with the gathering to what role politics, gender, and sexuality have in traditional music spaces.

Tell me a little about how the ideation of the Queer and Trans Oldtime Gathering came about?

Clive: Ever since I started attending oldtime events, I felt like I had to be a certain way to fit in. The culture surrounding oldtime and other traditional music I’ve been around is very, very straight and cis. As a queer & trans person, I didn’t fit unless I hid those things, and over time found others who didn’t fit in that same way and also got exhausted by hiding that otherwise very major part of my life. When I met Willi, we had a sweet kitchen table chat and decided we could work together to make this come to fruit!

Willi: Absolutely–fruits! That kitchen chat was only shortly after I came out, and the idea of “queer community” was just becoming a (physical, not online) reality for me. Really, square and contra dancing, which are pretty inseperable from oldtime music, always felt queer to me: dances where you engage in communal, non-sexualized touching regardless and gender, preference, age, and so on. The only other place I felt that kind of comfort was in the theatre.

Clive: Queer and trans people are bound together by the often crushing weight of navigating structures and societal systems designed for straight cis people and being able to spend time in spaces designed by and for us can be healing and transformative.

Willi: A lot of being a traditional artist in any discipline is tapping into apprenticeships and lineages with a deep, long, and sometimes difficult history. Queer people especially are in positions to navigate these traditions in beautiful, unique, and fraught ways. When a lot of vernacular music and oral transmission is threatened by the speed of digital culture, it feels intuitive that queer folx would gather together to celebrate, mourn, and share what we have inherited and who we are.

What are you hoping to achieve with the gathering?

Clive: I’d like to cultivate the national community of queer and trans oldtime musicians so we can all know one another better but also start to create a shared vision of what is important to carry forward with this type of music.

Willi: It’d be great to have a network where we all helped one another out. As a full-time touring musician, I’d like to be able to partner with other queer folks more often.

Can you speak to what kinds of sessions there will be?

Clive: There will be flatfooting, cooking for quality & quantity, gender-free dance calling, crankie making, oldtime fiddle, oldtime banjo, maybe a high-level harmonica round up, oldtime guitar, some facilitated discussions about things particularly relevant to queer and trans folks, and who knows what else yet! We’re still seeking workshop leaders so propose away!

How are you approaching issues of non-out community members attending the event?

Clive: We will require everyone to get consent before taking photos, and to make sure they don’t post on social media without permission of those in each photo. There may be more direct requests from people who are not out that we will need to respect, and their need for discretion will be upheld in whatever ways are best for them.

Willi: It is one of our top priorities that discreet and non-out people feel safe and welcome at QTOTMG.

Was hosting it in Wisconsin and the Midwest an intentional decision?

Clive: We are both from the Midwest and it’s where we have access to renting spaces for less money than other places.  We also feel geographically excluded from coastal events all the time, so are delighted to have something else we are excited about in the region.  We’re also excited to partner with and help further the work of Buttermilk Falls CSA & Folk School, whose mission it is to provide access to a rural space for people who have contemporarily had less easy/safe access to that, especially LGBTQ+ folks, people of color, and indigenous folks.

Willi: We hope to move the event around someday…maybe not next year, but certainly someday! I think a new place every couple of years would really be great.

Clive: Also we hope others take on organizing in future years in their regions.

During last year’s Clifftop, a lot of folks talked about the ‘Gay Sweep’ of the contests, which felt super exciting from my own perspective as a queer person. How do events like that, as well as this gathering, impact queer people within and outside the traditional community?

Clive: I think having visibility within the oldtime scene is really exciting; not only are queer people actually everywhere in oldtime but also we work incredibly hard and super talented. For queer and trans people who are not yet involved in oldtime, it could propel them to help support or carry on oldtime music in some way in the places they live.

Willi: Oldtime, roots, and folk music walks a fine line between rural and urban that can link communities and create spaces for exceptional togetherness. I know that in my rural area in Arkansas, it’s these big dances that still get people together. As a queer, cis male, I’m most excited see the evaporation of shame in people both queer and straight brought about by a spirit of talent and inclusiveness.

How will queer and trans people of color and indigenous folk be centered at the gathering?

Clive: We are both white and know that we don’t have all the answers to this question and we are always learning ways we can do less harm while still living as settlers on colonized land. Amplifying and uplifting the music, leadership, and work of the folx most marginalized in oldtime music is imperative. Here are some things we are doing right now: we are actively seeking queer and trans people of color and indigenous folx to lead workshops, aiming for more organizing roles to be held by queer and trans people of color and indigenous folx in many future years of this event, and on the registration form all participants are asked to self-assess their financial situation and decide what level of payment they can afford and/or name additional assistance they need to cover travel costs.

We are open to feedback on how to do more and dedicated to repairing the mistakes we have made as we continue moving forward.

In the last year, there’s been some conflict within the oldtime community (mostly in the sphere of social media) with some folks saying we shouldn’t introduce gender, sexual orientation, race, or politics into these spaces dedicated to traditional music. That it should just be about the music and the music alone. Clive, you’ve talked a bit about feeling like you had to hide a big part of yourself to fit in within the community and also I’m assuming, as a trans person, for your physical safety as well. I’d love to hear your thoughts in response to those people who want to just ‘focus on the music’ and not introduce gender or politics into the discussion?

Clive: I don’t understand how these are even things people believe can be kept separate. I really believe that people are the heart of traditional music and you don’t get to have people without interacting with gender, sexual orientation, race, or politics. I would guess the people that say these things should stay separate have consistently experienced a whole lot of intersecting privilege and have generally been in a position to consider themselves the default.

How can non-queer folk support the event?

Clive: People who are cis and straight can demonstrate their ally-ship by donating to our gofundme {https://www.gofundme.com/f/1st-annual-queer-and-trans-oldtime-music-gathering} to help make the event more financially accessible to folks with less access to wealth (queer and trans people, especially those who are also people of color or indigenous are significantly less likely to have access to wealth than their straight cis counterparts for a million reasons). If a person is local to Minneapolis/St. Paul, they could give people rides from the airport to the farm, help set up the dance floor and tent, or offer childcare at the event. Contact us at qtotmg@gmail.com if you want to help in those tangible ways!

Willi: Amplifying the event on social media (Insta: @queertransoldtimemusicfest / FB: “1st Annual Queer and Trans Oldtime Music Gathering” ) and among your friends will cause more and more people to come out of the woodwork! If not time or money, that’s the #1 thing allies can do for us!

Willi: Anyone with any questions at all should reach out to us! If you think you’re either “queer, but not queer enough” or “just too queer” or “not oldtimey enough” or “too rural” or “too urban” for this event, it’s probably not true. This community can be what we make it, and to do that, we need you. This will be unlike anything that has ever happened before.