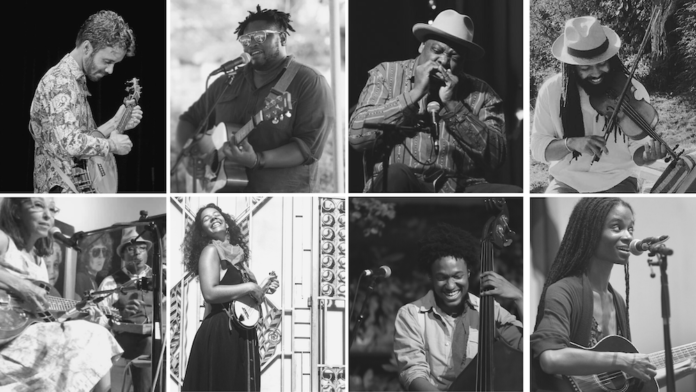 2020 and 2021 have given us little to look forward to. If I were to pick one word that best encapsulates the past year, “exciting” would not be the one (in fairness, neither would “boring”). One thing I have found to be excited about is the Fort Worth African American Music Festival, due to take place online on March 13. In addition to being a welcome offering of online music from skilled performers, I feel that – where African Americans and our issues are concerned – it addresses the most urgent needs of the old-time music scene today.

Stringband musicians are singularly concerned with history. Deep knowledge of the tradition carries as much weight as technical skill in our circles; and if an individual can only have one, it’s often considered better to have the former. While the world at large has little reason to know the backstory of the music we love, it’s surprising that we have largely forgotten a significant share of our own venerated forebears. Far too often, I have heard old-time music explained as “Irish music that came to the New World and changed.” That precipitates a discussion of what “changed” the Irish music; whereupon one generally hears that African rhythms somehow snuck into the repertoire. This telling of the story is riddled with inaccuracies; most pertinent to this piece is that it portrays Black Americans as an external, indirect influence on the music. It portrays our traditions as outside sounds that passively bled into fiddle repertoire.

One can recite the entire, oversimplified “Irish melodies, African rhythms” narrative and leave out that some of the Africans brought here had their own fiddle traditions prior to their enslavement. One can leave out that Black people were playing the fiddle in the colonies in the seventeenth century, while the mass immigration of Ulster Scots to which we are told we owe the entirety of American fiddle music began in the following century. One can leave out that Black people developed the banjo from African instruments.

We are moving, as a community, into a period of greater awareness around this history. Even in the relatively few years that I’ve been a part of the conversation, I have witnessed a profound shift in the way we tell our collective story. That change is needed, and yet ongoing. The most pressing needs that I see within the old-time community are as follows:

The Fort Worth African American Music Festival neatly checks all three of these boxes, and then some. It features a diverse cast of Black musicians (myself included) who perform in a range of styles and come from a range of different backgrounds. It addresses my first point of concern: here is a slate of Black stringband performers with their names in large print, whose art displays the extent of our ancestors’ musical innovativeness and versatility. That musical diversity fulfills the second need. Placing these styles on a level playing field, in a format that emphasizes their interconnectedness, undermines the notion that they must be kept separate and apart to retain their integrity. Moreover, it undertakes the revolutionary task of reframing stringband music as a facet of African American music, whereas most members of the community would tell you that there’s an African American subset of old-time music. For once, white old-time musicians are being invited onto Black musicians’ turf rather than the other way around, and that is huge.

In my opinion, answering the third need of old-time music — restoring living, breathing Black people to the tradition — is a process that begins with events like FWAAMFest. I have often struggled to reconcile my feeling that Black people aren’t being welcomed at our events with my belief that old-time musicians are significantly less racist than most majority-white communities you’ll find. Why would Black people who feel comfortable in any other white space avoid old-time music? The answer is one that has troubled institutions, corporations, and even cities for as long as I’ve been alive: lack of diversity is a self-perpetuating condition. Black people are less likely to go to an event where there are no other Black people, because missteps like the ones I referenced above are simply inevitable. How shall we resolve this problem?  With events like FWAAMFest, which are explicitly focused on Black music and include stringband styles. It will provide Black people with an opportunity to experience stringband music in a social environment that is meant for us, as opposed to one where we might sometimes feel like interlopers. It represents a chance for Black people interested in the music to connect with those of us who are more experienced in the community in a safe environment. Rather than plunging headfirst into the almost-exclusively white environment of stringband music with no safety net, Black people will be able to experience the music on friendly turf and develop a community that they can rely on for support if they decide to delve deeper. FWAAMFest, in this respect, will have the effect of building a staircase where once we had to climb a wall.

Our community has come a very long way in a relatively short span of time. But a community is made up of its members — and like those members, always has more growing to do. I believe that FWAAMFest is just what the doctor ordered, and I hope that community support will prove it to be a viable template for future events. I’m honored to be a part of it, and I can’t wait to see what new life it brings.