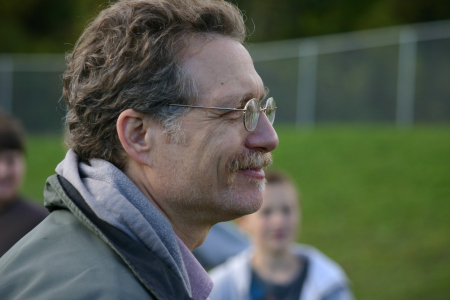 This personal remembrance of Jon Bekoff was written by his friend Ms. Moonshine on the occasion of his death five years ago today and originally published on the blog Old Time Party. At her request, we are reprinting the remembrance for a man who was obviously an amazing fiddler and, by all accounts, a wonderful human being.

Jonathan Bekoff died at home in the night between June 14-15, 2015, after a three-year illness and the culmination of a lifelong spiritual journey. He loved this blog and asked one of his music students to help maintain the site after he died. An excerpt of this will appear in the Summer issue of Old-Time Herald.

Jon was born May 8, 1959 in Staten Island, NY. Raised in Montreal, Canada, he also lived in Ohio, Edmonton, Virginia, Oregon, and Vermont before settling in Greenfield, MA in 1996. He attended the University of Oregon, and was a gifted middle school math teacher for 27 years, mostly in Guilford and Brattleboro, VT. As his former principal at Brattleboro recalled, “Jon was a gentle soul and loved to connect with people, especially with the kids. He came into himself in the classroom; he explained things so clearly. His students loved him. Everyone loved him.”

Jon had strong passions for studying, collecting, playing, mentoring, and sharing roots music of the world, particularly American old-time and music of Africa (e.g. Malian, Congolese, Shona) and the African diaspora (e.g. Mento, Haitian, Cumbia.) The diverse content of this blog is testimony to his manifold tastes – although all his tastes share one thing in common, i.e., rhythm and groove. To listen to the African music alone in Jon’s iTunes library would take an entire month of continual playing. Jon had a scholarly interest in the people who documented and field recorded roots music. For example, he regarded Alan Lomax, Harry Smith, and Moses Asch as the “holy triumvirate” of old-time music; having “huge, incalculable long-term cultural influence.”

Jon was a multi-instrumentalist, playing guitar (excelling at several American and African styles), mandolin, banjo, kora, balafon, etc., but fiddle was his forte. Jon started fiddling in 1978, and quickly mastered several regional styles, though he seemed to prefer the excitement and danceability of early Georgia stringbands and favored the “great southern waltzes” of the 1920s and 1930s. Jon developed a unique style of “complementary” fiddling, drawing from the Cajun tradition, but with his own characteristic counter-melodies, harmonies, and syncopated double stops. Jon disliked being the only fiddler in a jam, and said after one masters a tune inside and out, it more fun to complement the melody of another player. This approach he developed is probably one of Jon’s most important contributions to old-time music. This clip of Jon and his protege, Nate Paine, playing Coleman’s March (recorded August 2015) is a good example of how Jon started a tune with the melody lead, then shifted into accompanist fiddling:

Although he once played electric bass in a Zydeco band, and later fiddle in a Cajun band (the high point of his musical “career”), Jon shunned performance opportunities and large festivals in favor of creating music with small groups of friends (friends who considered him as their mentor). Despite his uncanny abilities on the fiddle, Jon was not elitist and regularly played with less skillful players of all ages. He was committed to sharing the love of music. He encouraged those who were drawn to his style to instead learn from source recordings. This self-effacing approach to music was sometimes frustrating, because regardless of the genre, Jon’s version of tunes sounded better, even more authentic, than the original recordings. One might attribute this phenomenon to his ability to intensively and actively listen to a recording, and to reproduce the music as it originally was played, embellished by his understanding of the genre from which the source recording emerged. Anyone who came in contact with him came away with their curiosity awakened and courage bolstered. As a gifted accompanist and a natural teacher, Jon had a curious ability to assess the strengths of his playing partners; his sensitivity and giving nature drew the best out of players, while gently buoying their weaknesses.

Regardless of the genre, in a good jam, Jon liked to play a single tune for no less than ten minutes and often up to 30-60 minutes, depending on the endurance of his musical partners. This reflected his need to exhaustively explore a tune’s harmonic and rhythmic dimensions. While faithful to a tune’s originally composed character, Jon experimented in a way that adds diversity and richness to an otherwise simple folk tune. After 10-15 minutes of playing a tune, one could start to hear delightful syncopated rhythms, evoking an ethnic feel from somewhere in the Caribbean or West Africa. This “complementary” fiddle ability of Jon had the effect of making anyone sound better than they could ever sound alone, and explains Jon’s popularity amongst his musical friends. For most musicians, playing music in a jam with Jon bordered on an ecstatic experience. For Jon, jamming seemed to be when communed best with others, and when he felt most at ease, “delighting in relaxed unity with the constant flow.”

According to his friend Meghan, Jon used to sing long, complex ballads in his younger days. Here’s Jon at age 24 singing Paddy’s Lamentation.

One of Jon’s unique contributions to old-time fiddling was his ability to “resurrect” archaic ballads which he converted into fiddle tunes, e.g. Watchman Ring the Bell:

or twin fiddle “compositions” with his musical partner, Nate Paine: e.g. Charlie Poole’s “Once Loved a Sailor,” which can be seen/heard here amongst >5 hours of footage of Jon with Nate, or with other players (>100 posts by MoonshineV):

This blogOld Time Party, was Jon’s passion from about 2011-2015, as the 3rd (and most active) blog administrator. His original goal was to create an online community of like-minded music lovers, but the blog morphed into what he described as his repository of “cool stuff” that he discovered posted elsewhere or was submitted by subscribers. Basically, Jon wanted to make it easy for others to find “cool stuff” all in one place. He once said he would have expected that old-time musicians to find interest in the content regarding Caribbean, African, Cajun and other genres he re-posted here, in addition to the exhaustive collection of old-time articles, music history, CD/LP reviews, book reviews, links to other archives, and classic recordings. He was our acoustic curator and lined up posts for this blog until his last 2 weeks of life (as evidenced by the posts that continue to emerge under his handle, oldtimeparty, through mid July). Anyone who wants to submit something they think Jon would like to have had posted, or who has recordings of him, contact the blog at oldtimepartyblog (at) gmail.

Jon’s last words were laid out in a letter to family and friends, in which he informed us that his last year of life was his “most peaceful, clarifying, and meaningful.” In addition to communing with others through music, Jon adored spending his last few years alone, exploring alternative healing, spirituality, reading, listening to audiobooks, podcasts and his expansive world music collection, and hunting material for his blog. Jon left this world without fear and with profound gratitude for his 56 wonderful years; he wished us to cultivate affection for all beings. Let us honor him by taking a moment to browse through the blog’s archives. Jon never made commercial recordings, but several hours of his unique fiddle style can be experienced at MoonshineV Old-time Field Recordings YT Channel

One of Jon’s fiddle students in his final year posted a highly personalized tribute movie for Jon. All the audio was fiddled by Jon or came from his personal audio collection. Audio borrows heavily from the Harry Smith Anthology and visuals borrow from Harry Smith’s 1950s stop-motion film “Heaven and Earth Magic,” as well as from photos/vdo contributed by Jon’s old-time musician friends. Astute blog followers will also note many world music images from posts of this very blog. Jon viewed this 22-minute tribute twice in April and said he liked it.

Note: The original posting can be found here along with many more videos and recordings of Jon’s playing.