Alan Murphy is one of the greats of Midwest fiddling and one who deserves to be known well beyond the region.

Born in Sibley, Iowa in 1945 and raised in Iowa City, Murphy came from a musical family heritage. His paternal great-grandfather, Frank Gallagher, was a fiddler, as were his great uncles on the other side of the family, Tom and John. Before Alan was born his father and his Uncle Leo played in a local dance band in the 1930s on drums and fiddle respectively. Alan says that when he was small no one in his immediate family was playing music anymore, although there was strong appreciation for music in the house.

It was it Alan’s teenage years that he showed interest in playing music himself, and was given a guitar for his 15th birthday. His Uncle Leo began playing fiddle again with Alan backing him up on guitar. At first it wasn’t strictly oldtime the two played, but “a few hoedowns, hornpipes, a few jigs. [Uncle Leo] also played a lot of what would have been pop music in the thirties. It was all just music to him.”

The transition to fiddle came quite quickly, though. At one of the jam sessions with his Uncle Leo, Alan picked up his fiddle and apparently took a liking to it. He soon got his own fiddle and from then on it became his main instrument.

His first musical mentor was another local fiddler, Otis McCray. McCray was an oldtime fiddler who lived in Johnson County (where Iowa City is located) since the 1880s and had known Alan’s great-grandfather. Once, while Alan was on his paper route he heard fiddling coming from in a house and mustered the courage to knock at the McCray’s door. From then on Alan would visit McCray to back him up on guitar.

By the time Alan was in high school he was already playing fiddle in professional bands. He has never limited himself to any particular genre, but played extensively in oldtime, bluegrass, country, and country-rock groups throughout his musical career.

Of particular note is the 1970s classic album Art Rosenbaum and Al Murphy on which the two recorded a broad collection of tunes and songs for banjo and fiddle. Murphy recorded a solo album, Through the Fields, in 1986 and was awarded Best Fiddle Album of the Year by the well-known County Sales record label. And in 2017 Alan released a wonderful album, Hogs in the Cornfield, featuring tunes he learned from Gene Goforth, Delbert Spray, Otis McCray, Lyman Enloe, and others as well as artwork by Howard Rains. 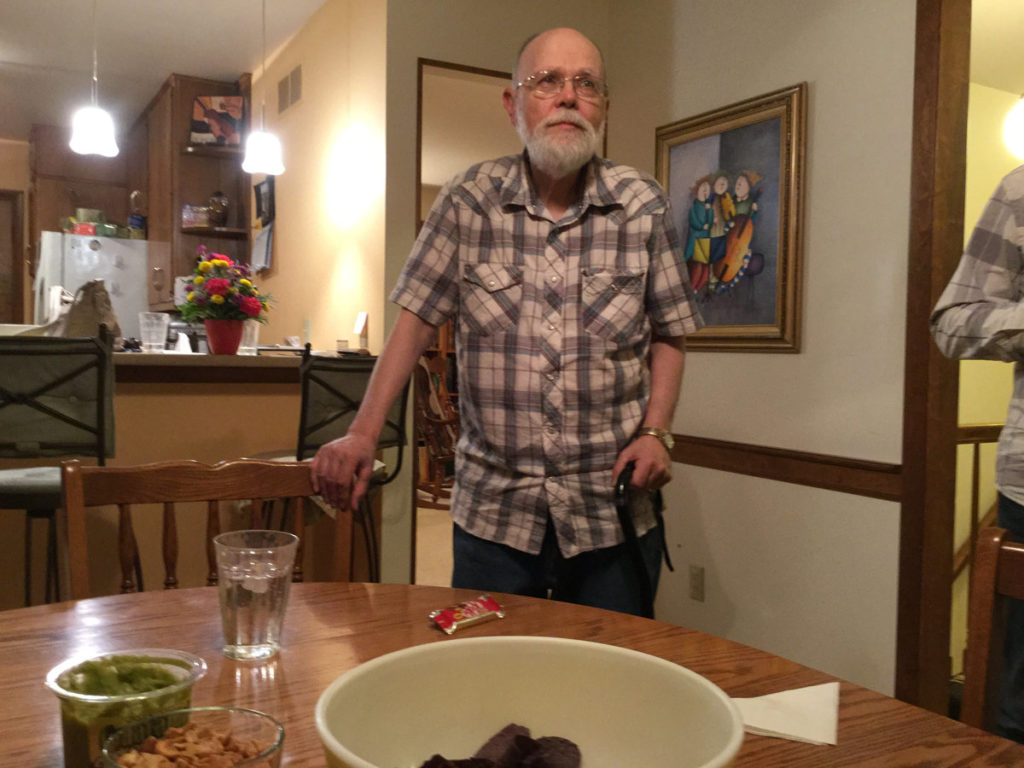 Beside being a great fiddler himself, Alan is also an important bearer of tunes from these older Midwest fiddlers. Alan received grants from the Iowa Arts Council in 1990 and 1992 to study with the two Missouri fiddlers Gene Goforth and Lyman Enloe and learned many tunes directly from the two.

Alan has been a full-time professional fiddler his entire life, playing with many well-known musicians including Kenny Baker, Kirk Brandenburger, Greg Brown, David Williams, Bob Black, Guy Drollinger, Nathan Bell, and Susan Shore. In 2000 he was diagnosed with multiple sclerosis which, as luck would have it, has mostly affected his mobility but not his playing. He continues to play actively today, mostly with his wife Aleta Porcella backing him on bass or guitar.

I met Alan Murphy in the summer of 2018 when my wife and I were invited to join a potluck and jam session at his home in Iowa City. About ten musicians as well as their spouses and children gathered in the evening to share grilled salmon, fresh Iowa corn, delicious salads, and ample beer. After dinner we retired to the picking parlor in the basement. The fiddlers Marc Janssen, Norbert Sarsfield, Alan Murphy, and I called the majority of the tunes, backed up by Brandi Janssen, Aleta Porcella, Warren Hanlin, and others for a couple hours of great fun.

I returned two days later to film the interview and tunes for Oldtime Central. Both Alan and his wife Aleta were wonderful and generous with their times, tunes, and stories.

Here are a few other videos featuring Alan Murphy well worth checking out.

A full concert of tunes from the Hogs in a Cornfield album.

An Iowa City profile and interview with Al Murphy.