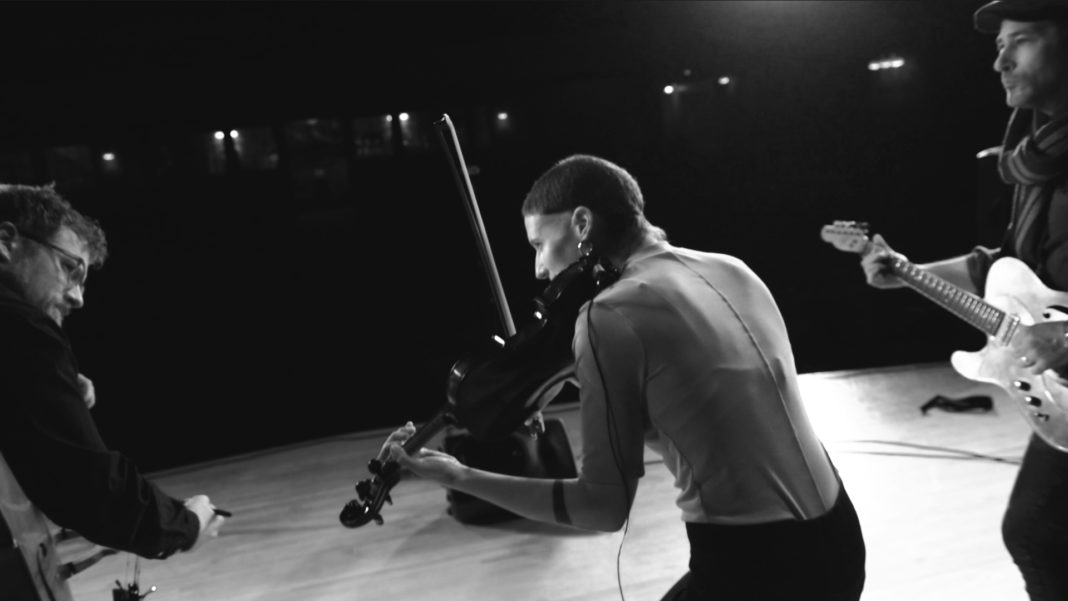 “When I interact with American fiddle music, it’s hard to distinguish between the sounds that I’m actually hearing and the music that is happening inside of me. From the rhythms of my body reacting in dance, or the way vibrations from the instrument are interacting with my ears, or literally my jawbone, it’s a really good, intense experience. And it does feel–there’s no better word for it– but it does feel hard core.”

Laurel Premo’s love for traditional music runs deep. Raised in the Upper Peninsula of Michigan by musicians and surrounded by a boiling pot of traditional music influences, she most recently studied folk music in Norway after nearly a decade of work with her duo Red Tail Ring. Her record “The Iron Trios”, released in October 2019, is not only a culmination of these experiences, but also a meditative study on North American fiddle music and Laurel’s movements within it.

“The Iron Trios” is a collection of both original and traditional tunes that Laurel recorded with a few different trio arrangements including collaborations with Evan Premo, Owen Marshall, Joshua Davis, Michael Beauchamp-Cohen, Jacob Warren, and Aaron Jonah Lewis. Laurel applies a walking pace to many of what she calls “minimalistic melodies from traditional North American fiddle music” in order to pair them beautifully with fingerstyle electric guitar, acoustic guitar, and bowed double bass.

The record provides an interesting and diverse selection of tunes, while also still feeling unified. It opens with a particularly brooding version of Art and Hiram Stamper’s “The Brushy Fork of John’s Creek” before shifting to “Polly Put the Kettle On”, whose intonation choices are informed by both Marcus Martin and Manco Sneed, who was a member of the Cherokee tribe. Laurel’s original tunes, “Iron in the Northern Ground” and “Snow Blind”, hold their own to the traditional tunes on the record, testaments to Laurel’s chops as a composer. Other standouts include a Métis tune from Fred Allery, Mike Page, and Herb Lafferty, “Red River Jig”, and “Fox & Hounds”, which comes from an African American fiddler named Will Adam. This tune features exuberant and complementary twin fiddling with Aaron Jonah Lewis. The record’s final tune “Till the Warfare is Over” is based on a shape note hymn that has been reimagined with electric guitar, fiddle, and bowed bass. It’s almost cinematic in nature and a fitting close to the project.

Laurel produced an extended notes booklet to accompany the record, and in the introduction she writes, “The melodies I used are greatly inspired by the fiddlers whose source recordings I studied, but they are not replicas. More accurately, these notes and bowings illustrate how I played this music for the tempos and settings on this record.” The 36-page color booklet is a delightful and illuminating addition to the project and includes biographical information about the sources, detailed notations, personal experiences, intonation discussions, and historical perspectives.

Laurel and I connected on the phone a week after the official release of “The Iron Trios.” At that point, it’s safe to say I’d already listened to the record over a dozen times. Not just because I wanted to be prepared for our conversation but because it is that good. I first listened while driving down a series of two-lane state highways across the plains of Western Kansas in late September. It’s expansive, open space, but it’s far from desolate. There’s a subtle beauty here that one has to slow down to appreciate.

Perhaps Laurel can relate. By slowing down some of the tunes on “The Iron Trios” to a slower pace, she reveals some beautiful nuances and intricacies. Even the tunes that lean towards more traditional tempos, ”Old Time Sally Goodin” and “The Original Grey Eagle”, feel just as driving (though not played at barn-burning speeds). In fact, I’d argue that because Laurel can’t hide behind speed, these tunes are even richer.

This inclination to slow down the tunes came after Laurel took a break from performing in 2017 and went to do a semester of study in Norway.

“I came back from that experience with sounds in my ears of this heavy traditional dance music that was walking paced” Laurel says. “Some of which was in 2/4, which connected a few points for me. It led to me experimenting with American fiddle tune repertoire on jaw harp using the traditional techniques I was working on over there and got me thinking towards producing some sort of fiddle-led project that had a lot of weight to it. My sabbatical there helped retune my ears to listening and exploring overtones and layerings of rhythms in music.”

Back in Michigan, Laurel experimented with a few demos. “I found that I had to slow down the tempos to combine the American fiddle melodies I had selected with the finger style electric guitar that I had envisioned. Together, the crunch and bell tones possible with electric guitar and the rasp and dissonance available from fiddle started to form the heart of what became ‘The Iron Trios.’”

It’s interesting to learn that Laurel was exposed to Nordic fiddle music in her youth concurrently with American fiddle music due to the Scandinavian heritage of the Upper Peninsula.

“As a kid, the first time I saw fiddle music on a stage and thought that’s cool it was while hearing Nordic fiddling. The rural region where I grew up had a large amount of folks of Finnish and Swedish ancestry, so many musicians from those roots passed through to perform. Besides the influence of my mother’s American fiddling, which also seemed monumental to me as a kid, various Nordic fiddling traditions were the first views I had into the fiddle having a driving power, and intrigue. And so, I sought out ways to study them, like spending a half year over in Helsinki during my undergrad. Following that, when I took up American fiddling seriously, I was grateful that I had experience under my belt of having practiced what to focus in on- cross tunings, bowing rhythms, intonation – from first being a student of something else.”

Her connection with these roots plays out in a variety of ways.

“In many melodies from Finland, Sweden, Norway, there is a healthy and honest balance of lightness and darkness,” Laurel says. “A full range of the in-between expressions that are very real to a raw life. So, that has always kept me. But also when it comes down to it, there’s just some mind-blowingly good, driving fiddle music from those folk traditions.”

Laurel refers to herself as a mad scientist a few times during our chat. I can see it. For one, some of her notations in the booklet feel almost mathematical in nature. There’s color coding and geometric forms, and as a result, they communicate things where staff falls short. One of the main reasons she wrote such detailed and varied notations was because of the collaboration with her brother Evan Premo, who plays some incredibly growling and stirring bowed bass on the record.

“My brother’s musical work is as a composer and performer in new chamber music, and he’s extremely adept at interpreting musical expression from the page,” Laurel says. “We grew up making music together, but we hadn’t played fiddle music together as adults. In order to bring him into my rhythm world, I notated the melodies and bowings I was using. It proved to be a great tool for our communication and collaboration.”

Laurel chose to bring electric guitar into this project for its sustain. “It was much more about the functionality of that instrument and what it could add when we were leaving so much open space in the music,” Laurel says. “And also for just the slightest bit of overdrive to match what I aimed to give on fiddle.”

Laurel’s choice of recording tunes sourced from musicians of diverse backgrounds, including black and indigenous fiddlers, and sources from geographically farther north, was a conscious decision.

“I feel like it is a responsibility of mine to use the privilege that I have of often being in front of a microphone to amplify ideas which I think are important for change,” Laurel says. “In my performing life, this has taken the form of simple expressions of positivity, to focused appeals on topical or local issues of social or environmental justice, or simply painting a true picture of the traditional music that I perform by carefully crediting my sources, and digging up a representational variety of sources to hold up in the light.”

Laurel was a recent guest on Cameron DeWhitt’s podcast “Get Up In the Cool”. She spoke a little about her philosophy of approaching performing music from a place of service. I asked her to elaborate.

“This idea of music as a service entered into my professional identity a few years into pursuing music as a career,” Laurel says. “It has continued to help me steer since then. Bringing that idea in was the result of conversations with peers whom I admired for the energy of respect and purpose that they seemed to carry on stage. In live shows, one of my goals is to create an outlet for someone else to have an internal experience. I take it very seriously. I’m completely aware that people do not need what I create to survive – I’m not a farmer, I’m not a builder. But this is what I can do, and like any therapy or meaningful interaction with a friend, art can help you see yourself, and see the world around you. My own personal experiences as a listener and those experiences shared with me from strangers attending my concerts have underlined for me that music can be transformative.”

I ask her how this plays out with the record. “That’s interesting,” Laurel notes. “I often think of this concept of service as physically being with people and me showing up and making space for them. But with a recording, people get to set up a medicinal situation for themselves anytime they want. If my music can be a part of that for someone, that’s a beautiful thing too.”

“The Iron Trios” as well as the extended notes booklet can be purchased on Laurel’s shop.