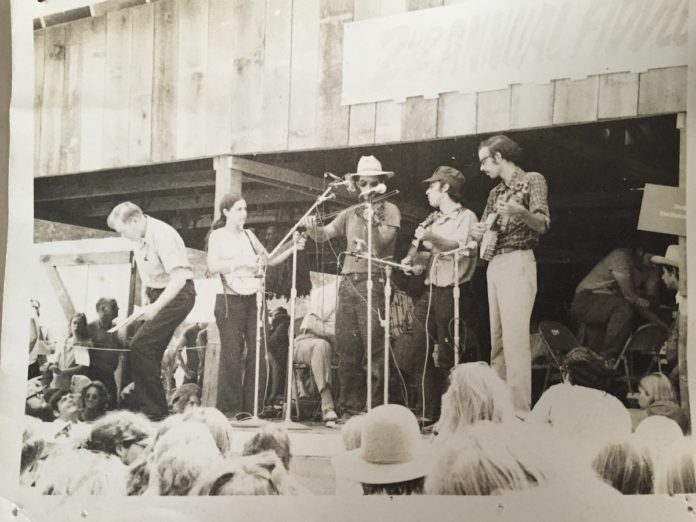 Mark C. Campbell is an oldtime musician based in Richmond, Virginia. Mark grew up in the Shenandoah Valley of Virginia, where folk music and Shape Note hymns were a regular part of his life. Mark soon found himself in the epicenter of oldtime and progressed from building fruitcake tin banjos to spending time with notable fiddlers, including Melvin Wine, Tommy Jarrell, Armin Barnett, and Benton Flippen.

Contributor Rachel Krause caught up with Mark at the Central Rockies Old-Time Music Association Festival in July 2019. Mark has provided his reflections on his life as a musician.

My mother was raised in the Appalachian Mountains of Pennsylvania and often clogged a step or two in the kitchen when happy. When my father was done with his military and armament job obligations in 1962, he decided we should settle in the Shenandoah Valley of Virginia. I was nine years old. Without a television, my mother bought me instruments from the Salvation Army to assuage my boredom.  I finally saved enough to buy a Sears and Roebuck Silvertone guitar in 1964 and learned chords from neighbors. Around the same time, our church began a folk mass which focused on Southern Shape Note music. There I met my lifelong friend Pete Vigour (now of the band Uncle Henry’s Favorites) and soon began to explore the banjo with the church group known as the Holy Hooters. I began building fretless banjos made from fruit cake tins. (I still prefer to play fretless banjos.)  We were soon steered toward some of the older old time musicians of the area. Before we could drive, we were taken to see Ed Weaver, as Pete recalls, who was a neighbor of Pug Allen in Stuarts Draft, Virgina. There we heard the G major version of “Cluck Old Hen!”  [continued below]

As soon as Pete could drive, we took off in his dad’s 1957 Chevy to the Stuart, Virginia festival. As we walked across the field with our washtub bass and Sears guitar, we were hailed by West Virginians Herbert Pitzer and Harry Dickson who were going on stage to open the festivities.  They asked us to accompany them. We had no idea how to play “The Cuckoo’s Nest”, but we kept time as best we could. We thought we had messed up the whole opening but the men said, “Well thank you, boys.” We were hooked on the old timers forever.

My folks moved across the Blue Ridge to Greenwood, Virginia in 1971 prior to my attending University of Virginia in the fall. While attending the Greenwood Arts and Crafts Fair, I heard Armin Barnett playing fiddle.  We had never heard such a great, young fiddler. Armin was in graduate school at UVA and had learned a lot of music from Franklin George of Western Virginia. I joined Armin’s band, the Yellow Mountain String Band as banjoist, and we won third place in a competition on the Mall in DC. We later attended a festival in Marlinton, West Virginia where I first met Burl Hammons and listened to Maggie and Sherman Hammons.

Armin hosted a party dubbed “Alternate Galax”, where I met collectors Alan Jabbour, Bill Hicks and Peter Hoover. While at the Lithia, Virginia festival, Armin suggested that I go over and listen to blind fiddler Harold Hausenfluck. I was taken by his powerful southern bowing. Upon Armin’s graduation in 1972 the area was left with few fiddlers, so I picked up the instrument.  I had never dreamed that I could play a fiddle and, with no teacher, there were plenty of neighbors that knew I should never play my $10 fiddle.

I suppose I fashioned my playing first after Armin and Burl, but after many years attending the West Virginia State Folk Festival in Glenville, I began to learn the bowing of Melvin Wine, Harvey Sampson and Wilson Douglas. I also enjoyed the playing of Ernie Carpenter who to me, had a distinctly southern style to his bowing which was very different from his relative French Carpenter.

French and Melvin’s fiddling became favorite styles of mine.  Southwest Virginia and North Carolina were also my summertime haunts.  Besides listening to Tommy Jarrell, I heard or played with notables such as Benton Flippen, Enoch Rutherford, Abe Horton and Matokie Slaughter. I co-managed Charlottesville’s Prism Coffee House for several years, which hosted weekly old-time jams.

After college, I moved to the Norfolk area where I enjoyed a year with the Tidewater Friends of Old time Music and spent many happy hours at Ramblin Conrads where such bands the Highwoods String Band and Plank Road visited. We also ventured to festivals in Eastern North Carolina.

I next was employed in Richmond Va, and joined a very lively, weekly Wednesday night dance group that included Harold.  We sometimes counted six squares and a dozen musicians who were mostly the diaspora from rural parts of the state. I met my wife, Marty Gravett while dancing there.  I first joined a band called the Main Street String Band, and we can be heard playing “Cuffy” on one of the Galax Albums. With Marty we then formed the Down River Dance Band and sometimes ribboned at Galax.  Harold once convinced us to bring the Roan Mountain Hilltoppers to town for the Easter Parade and a dance.

Hosting old fiddler Joe Birchfield changed my bowing again.  He had such a strong bow motion that I just had to incorporate into my dance playing philosophy.  When most of my band moved away and I had won the 2001 Clifftop fiddle competition, I decide to cut a solo CD called “Deep Roots” in 2002.  I was subsequently selected as a Master Fiddler teaching for the Virginia Foundation for the Humanities.

In the early 2000’s, Jim Costa of Hinton, West Virginia and Jim Lloyd of Rural Retreat, Virginia and I formed a traveling group and cut CDs “Costa & Campbell with Amazing Jim Lloyd”. In 2006, we produced“Still Live Too” with friends. When our daughters Molly and Mauren came of age, my wife and I formed the Campbell Family Band. We toured with the Virginia Commission for the Arts, and cut a CD “Hop Up Pretty Girls” in 2012. As the girls moved on, I joined with Mac Traynham and John Schwab to form the Sunny Mountain Serenaders to travel and produced “Into Thin Hair” in 2015.

My most recent project is a recording called “The Devil’s Box” with Sean Franco that has yet to be released.

Learn more about Mark and access his videos by visiting www.markccampbelloldtimefiddle.com