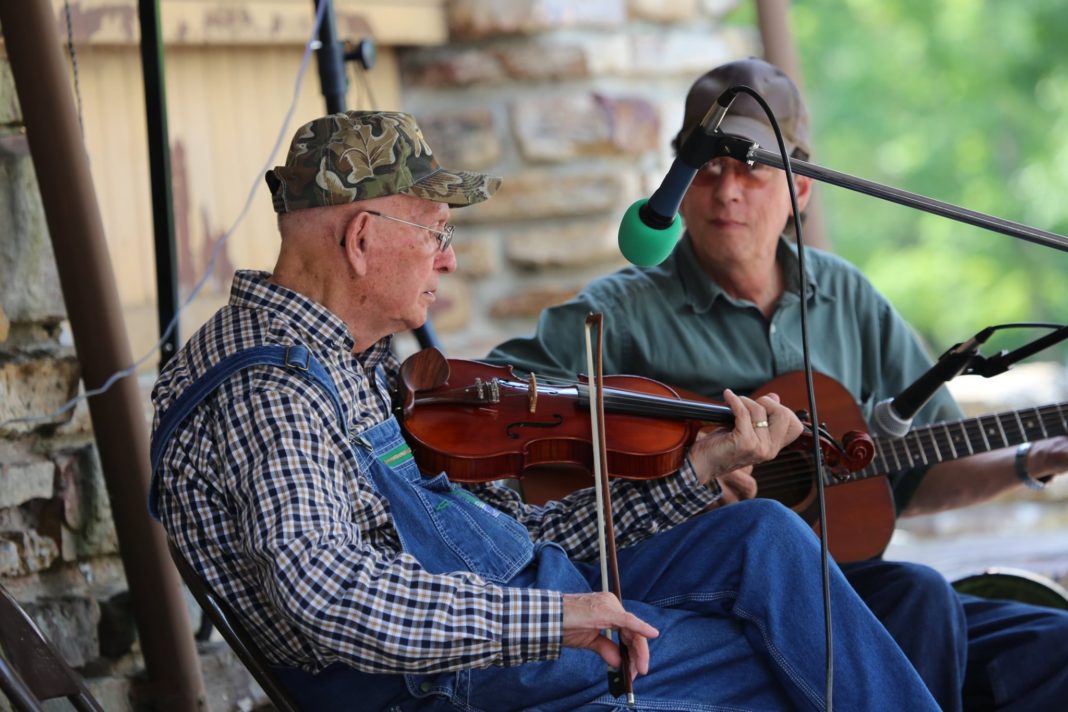 I grew up listening to Clyde on the old LP’s my dad got when he was working as a seasonal at Pickett State Parkin 1979 under Bobby Fulcher. The album was “Tough Mountain Music,” which featured Clyde and W.L. Gregory along with “Homemade Stuff”. That music took me to the time I had seen in my dad’s slides–days that showed people dancing and singing along to the fiddle and banjo just like they had done in that area for hundreds of years. I knew there was something different about that sound, and I heard a smoothness that I hadn’t heard in the bluegrass stuff I knew. In 2000, I went with a buddy to Pickett State Park’s Old Timer’s Day festival for the first time and saw Clyde play. I had never seen someone play that stuff live, and to see the guy I had heard on those old records was more than a little inspiring.

In 2002, I met Bobby Fulcher at the Fall Creek Falls Mountaineer Folk Festival. I shook his hand and told him who I was and who my dad was; Bobby said he remembered my dad well. He mentioned that there was a job opening working for the Cumberland Trail Conference on the “Big Dig,” a project  which was tasked with helping the Cumberland Trail State Park reach its goal of 300 miles from Kentucky to Georgia. I applied and got the job, and for the next two summers, I spent my time digging trail in the wilderness around Hamilton County. I was also exposed to the music and culture of the plateau on a level I hadn’t known before through programs and weekly square dances at the lodge. During this time, I picked up the banjo and the fiddle and with help of Bobby and the late Mike Defosche (who had spent a lot of time learning the tunes from Clyde and became one of the best Plateau fiddle players out there), I started to learn some of those old songs.

I kept learning those tunes one after another, and in the fall of 2005, I went to Pickett for the Old Timer’s day just like I had every year. Only this time, I made it a point to go sit down and talk to Clyde. I had been pretty nervous as I was so new on the fiddle, but I knew I was watching a master when he played, and that I had to know more about him. Clyde was easygoing and heck of a joker. He never lost an opportunity to crack a joke when he could. He made it easy to sit and talk. When I got up to leave and go home, he told me to come over sometime, and he would show me a few things. So I did.

For quite a while, I would go up and visit Clyde and his wife, Lorene, every Wednesday to play music and spend time with them. Clyde would sit on the couch telling stories and spitting tobacco into a Cool Whip container. When he’d fill it up, Ms Lorene would come put a lid on it and supply him with an empty one (True love!). He chewed Cumberland Twist in those days. “Not too sweet like them other ones,” he told me.

He’d show me licks on the fiddle and banjo and would play them over and over real slow till I got them. He was always patient, but he never let me cheat and try to get around a note. If Clyde said it was an upstroke of the bow at a certain part, you better hit that upstroke! He worked on my fiddle itself by smoothing out the fingerboard and setting the bridge right. He glued little feet on the bottom of my bridge to get the correct height, and that bridge is still on my fiddle today. He showed me the tools he used to build fiddles when he used to have a shop in Monticello, and he always talked about how they didn’t make knives like the old-time knives any more. Couldn’t keep a new one sharp enough.

Ms. Lorene would fix us lunch, which would sometimes be cold Spam on white bread with whatever vegetable Clyde had growing in the garden, and always hot black coffee. I loved it. There were many days when I’d go out to the garden with him and help gather some vegetables. More than a few times, I came home with Kroger bags full of mustard and turnip greens.

One of my favorite memories of my time at Clyde’s was a joke he pulled on me. He had canned some peppers from his garden and encouraged me to try one on my sandwich. He told me they were “just ol’ bell peppers. Ain’t hot at all.” I took a few and put them on my sandwich and with my first bite was instantly set on fire! He just started cackling and said “Too hot? Here. Drink this.” and handed me the only thing I had ever drunk at his house, hot black coffee. I took a sip and it just doubled the fire in my mouth. I turned red and my eyes were watering which made him howl and say “I fooled you! I fooled you!” He had canned habanero peppers! He brought that story up every time I visited him from then on, and it never failed to make him laugh.

In 2006, I came back to the Cumberland Trail as a Seasonal Interpretive Ranger working for Bobby just like my dad had done 27 years earlier. I still dug trail like I had 2003 and 2004, but this time I had the added element of going around the Plateau to collect stories from old timers and record their music. I also hosted the Cumberland Trail Radio Show on WDVX out of Knoxville. We put out tunes from the hills that had never been on the radio before. And that included some rare tunes from Clyde of course!

That was the summer that cemented my future. I knew back then that I wanted to be a Tennessee State Park Ranger and help preserve the culture and natural resources of my home. Through Clyde, Bobby, and Mike, I was exposed to the rich heritage that was my roots. My family has been on this plateau for 200 years, and I knew that I couldn’t let people slip like Clyde slip by without the world hearing their stories and songs.

Well after that, life happened, and I didn’t get back to the park system for a long time. I married my high school sweetheart, Hannah, in the fall of 2006 and she even let me have Bobby and Mike come play at our wedding! I never stopped playing the music and immersing myself in the culture of the Plateau. I played in a couple of bands and, while it wasn’t old time, there was fiddle and banjo involved. From time to time, a fine Cumberland Plateau dance tune even found its way onto the set list.

In 2013, I went to the Cumberland Trail Suite, a musical event set up as a fundraiser for the Cumberland Trail, at the Tivoli Theater in Chattanooga. Bobby had lined up a phenomenal cast. Hosted by Rhiannon Giddens and Tim O’Brien, the Suite showcased music from the whole length of the trail. However, I was there to hear Clyde. At 92 years, old he stepped up on stage in front of that crowd like he owned it. His hearing was getting bad, though, so when he played, his intonation was off. But I watched his fingers; they knew exactly where to go after a lifetime of playing.

In 2016, Bobby called me and said that they were looking for some folks to play at a square dance at Alvin C. York State Historic Area for their Veterans’ Day event. Nate Dodson, Josh Wilson, and I had formed an old-time string band called The Mockingbirds and had been playing quite a bit around the area. We had specifically been trying to learn those Plateau tunes because we knew there was something different about them. This included quite a few of Clyde’s tunes. When Bobby called, we were ready to say yes. We played that night, and it relit the spark that I had had so many years ago, sitting with Clyde on his couch playing those old songs.

Shortly after I left my job in outdoor retail and went to work for Tennessee State Parks as a Conservation Worker at Virgin Falls. That fall, I went back to school at Tennessee Tech and finally finished my degree after several years away from school. The fall following my graduation, there was a job opening at Rock Island State park for a Ranger. I applied and got the job. I was a Ranger, just like I knew I needed to be so many years ago.

I tell this long rambling story to show the influence music–specifically the music of the Cumberland Plateau–has had on my life. Had it not been for listening to my dad’s records growing up and hearing his stories and seeing his pictures from his time at Pickett. Had it not been for that connection of meeting Bobby and seeing his life’s work of the preservation of the music of our home. Had I not been introduced to Clyde, my life would be very different. That introduction and time spent with him had a profound effect on me that–even though I have attempted to describe it here–can never be fully explained.

That’s Clyde to me though. Rest easy. We’ll be fiddling in your honor from here on.