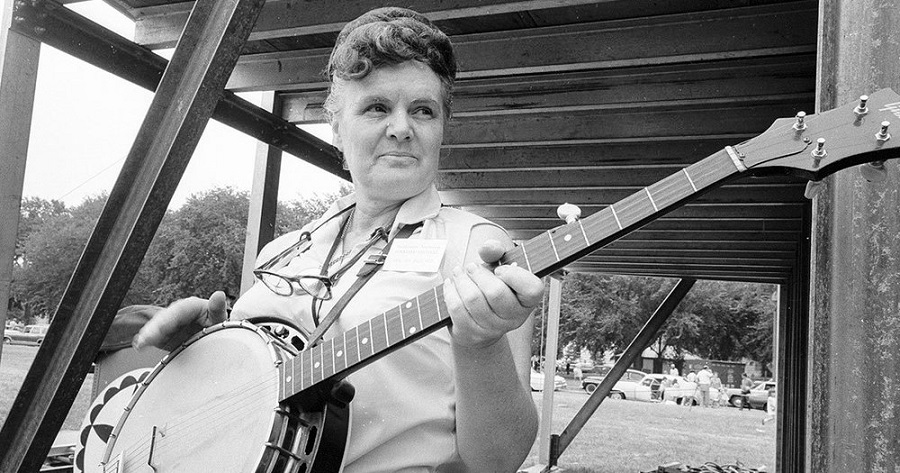 From the early 1980’s until her passing, my partner Marcy Marxer and I paid many a visit to Ola Belle Reed and her family. Each visit included Ola Belle’s soup and big hospitality, songs, tunes, stories, gossip and many doses of Ola Belle’s wisdom. We visited on October 3, 1997, a crisp fall day. After the usual hugs and greetings, Ola Belle was excited to show us a banjo. She said, “This is the real thing. This has the real sound of the old banjos, and it’s only $100.”

We looked at the banjo. Funky at best, it was a no-brand banjo with resonator, skin head and rustic neck. The strings may have been the original strings. The fingerboard seemed to be painted black with every other fret space painted gray. The sound wasn’t bad and indeed, very “old time”. From the wear on the skin head, it clearly had been played a lot and well loved at one time. We had no idea where this banjo had come from or how it came to Ola Belle. We didn’t think she played it, but maybe she had before she got her Gibson.

As we continued examining and playing the banjo, Ola Belle continuously reminded us that it was for sale and only $100. Eventually, we took the hint. We figured Ola Belle needed that $100. I told her we’d love to buy that banjo if she would sign it, which she did. I overlooked her spelling my name with a K and now, 23 years later, it has a home in Lansing, NC where Ola Belle was born and raised. We live here part time. Ola Belle’s son, David, sang “High on A Mountain” with me on the porch and her memory is strong in Lansing.

One more Ola Belle story; we recorded several of her songs. My album, “The Leading Role” was titled after her song, “Only The Leading Role Will Do.” It was prime Ola Belle-a humanist and feminist before old-time music embraced either of those words. She has a haunting song, “Where The Wild, Wild Flowers Grow” that I recorded, solo on banjo. When she heard the recording, she said, “You sure have your own way of doing things.” It was her unique stamp of approval on my arrangement.

During one of our visits, Ola Belle said, “I have a song I wrote that I’ve never recorded and I’d like to give it to you.” The song was, “Hopelessly In Love” and sounded like a Hank Williams song. Ola Belle could write as well as Hank for sure. She sang us the song and we recorded it on a cassette, and eventually on our album “POSTCARDS.” We had the honor and pleasure of singing it for Ola Belle and Bud Reed’s 50th wedding anniversary party in Rising Sun, MD, and it remains a highly requested song in our repertoire. Here’s to Ola Belle Reed, her songwriting, humanity and inspiration.

Cathy Fink is the first woman to win the WV State Banjo Contest (Glenville,1980,1981) and the Clifftop Appalachian Music Festival Banjo Competition (2018). She teaches regularly at music camps, workshops and online.
Truefire Guitar and Banjo Courses
Homespun Tapes: Singing with the Banjo
Catalogue of 48 Albums, Vinyl and other stuff