Home Book Reviews Oldtime on the Prairie: a review of Farmhouse Fiddlers 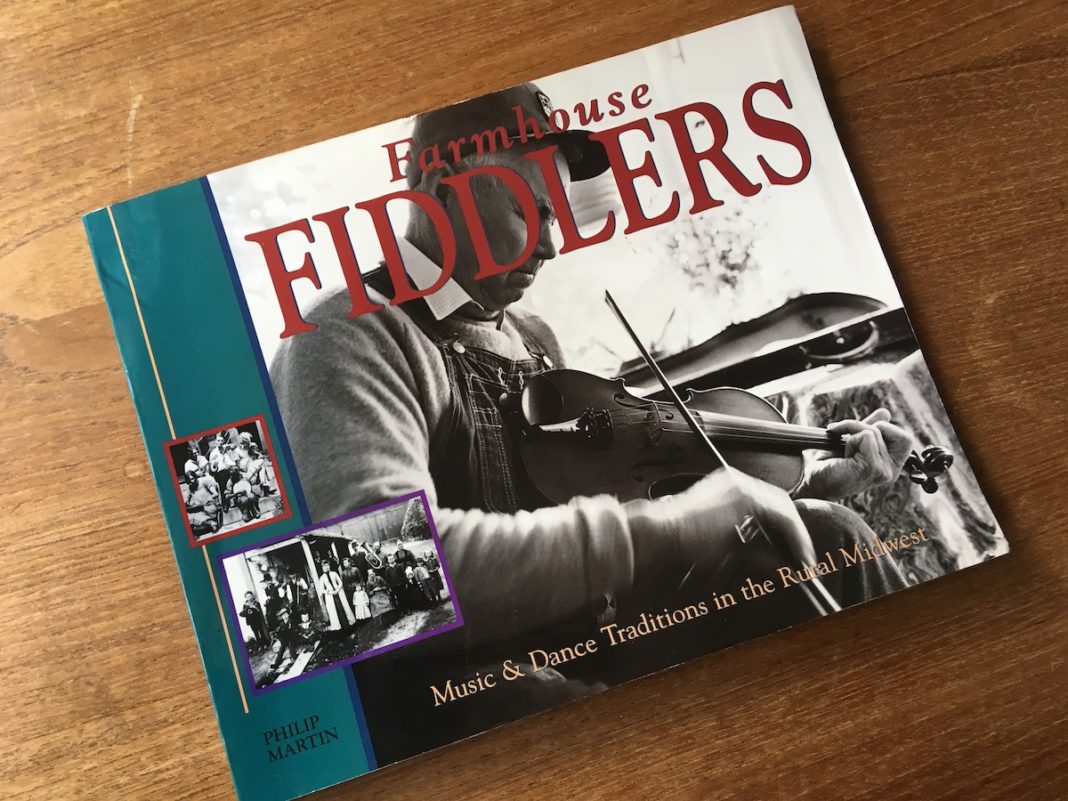 Between 1976 and 1985 fiddler and ethnographer Philip Martin conducted extensive interviews with more than 100 older-generation fiddlers and musicians in his local south-west Wisconsin. Martin played music with them, collected old photographs, and was often accompanied by photographer Lewis Koch who created additional images. Almost another decade later, in 1994, he published a wholly enjoyable ethnography based on this fieldwork called Farmhouse Fiddlers. While relatively little known, this book deserves to be high on the list of must-reads for anyone interested in the history of oldtime music in America, especially outside the bounds of Appalachia.

Farmhouse Fiddlers: Music & Dance Traditions in the Rural Midwest is filled with stories from the interviews, pictures of the musicians, and fascinating composite descriptions of the vibrant tradition of fiddling and dancing likely common throughout the Midwest until the beginning of the 20th century. Other works, such as Marshall’s Play Me Something Quick and Devilish: Old-Time Fiddlers in Missouri (2012), paint similar pictures of pre-20th century fiddle traditions in the Midwest, but none brings the reader so close the communities and individuals who actually experienced this musical practice as Martin’s work.

Above all, Farmhouse Fiddlers is fun to read. The sketches of life in Wisconsin farm communities and the role played by fiddle music and dance, together with the numerous black-and-white photographs, is hard to put down as the reader is drawn into this fascinating world. But the book does more than just tell stories. Like any great ethnography it also zooms out and reveals surprising and important features of the musical practice as part of community life.

From all corners of Europe

Immigration into the Midwest by non-native settlers had begun centuries ago, but the middle of the 19th century saw a huge influx of immigrants from many European countries. Germans, French, Irish, Norwegians, Swedes, English, Danes, Poles, Welsh, and other nationalities all came to the area to settle in small farming communities. The result was an amazing ethnic diversity, mostly of first-generation immigrants who brought musical instruments and traditions with them. Martin says that farmers of similar ethnic backgrounds tended to settle in “rural neighborhoods”. While each farm was worked by a single, extended family unit, there were many larger tasks in the farm calendar that were impossible to accomplish by a single family. These rural neighborhoods allowed farm families to pool labor for such tasks as corn husking, threshing, or barn raising.

“Overall, the informal system was called “exchange work,” or simply “neighboring.” The word was used as a verb: “We neighbored a lot with the Thompsons.” Exchange work included not only workbee socials but small jobs like tracking down a stray cow, mending a fence, or butchering hogs together.

There were also large-scale efforts that required the cooperation of the whole neighborhood. Building a country schoolhouse, a church, or a neighbor’s haybarn was such an occasion. Dozens of neighbors would turn out for hours, or days, of unpaid labor, working to haul, cut, saw, drill, and assemble is if the rising structure were on their own land.” (47-49)

Unsurprisingly, these collective efforts were also opportunities for music making, dancing and celebration that brought together the whole rural neighborhood on a regular basis. And while initially these rural neighborhoods were formed with other families of a similar ethnic background, by the late 19th century density and intermarriage had already led to the strong ethnic mixture that characterizes most of the Midwest today.

Thus Martin paints two fascinating pictures. One that shows how fiddle and dance traditions played essential roles in the functioning of Midwest farm communities. Because many tasks required collective work, farm families came together. Music and dance were important ways of expressing gratitude and solidifying the community ties upon which all depended. Good social relations were a matter of life and death. The other is a wild influx of highly diverse European musical traditions that came with the immigrants and quickly needed to find ways to assimilate as the communities became increasingly diverse.

One indicator of this diversity can be seen in the instruments that these Midwest musicians continued to play into the 20th century. Of course, the fiddle and piano had the primary roles, with their usual gendered associations. But the interviewees and pictures in Farmhouse Fiddlers show how common many other instruments were: pump organs, button accordions, double basses, harmonicas, mandolins, guitars, banjos, zithers, hammered dulcimers, and more. Just the images in the book alone show cellos present in at least five settings, contrary to the common notion that this instrument was a late addition to oldtime music. Given the ethnic diversity of the immigrants to Wisconsin, this comes as little surprise. But it does demonstrate clearly how varied the settings for this music have been since the very beginning.

“The dance party held in farmhouse kitchen or parlor was perhaps the most frequent form of wintertime recreation from the early 1900s through the Great Depression. Called “house parties” or, picturesquely, “kitchen sweats,” these country gatherings were an excuse for nearby families to get together to make music, dance, and just socialize.

As neighbors arrived by sleigh and on foot at a chosen farmhouse, fiddles and other instruments were taken out and tuned up. Those eager to dance helped move furniture onto a back porch or into the yard, while Mother carefully put family china and sentimental knick-knacks away in a safe sport. Others took care of food being brought in, putting most aside for a late-night “lunch,” and started a pot of coffee. The rug was rolled up, and even the kitchen cookstove, or the round pot-bellied parlor stove, was disconnected from its chimney-pipe and carried out the door by a team of willing fellows.

When all was ready, couples took their places on the bare floor, ready for the first stroke of the fiddle. With the echoing kerplunk of a banjo and the first wheezy chord of the pump organ, the dance was underway. For many hours into the darkness of a winter evening, the floors and walls of the farmhouse would sway to the pulse of waltz, schottische, and polka, to the strains of quadrilles, squares, and old-fashioned set dances.” (43-44)

Just as fascinating as Martin’s portrayal of pre-Depression fiddle and dance music in Wisconsin is the detailed ethnographic insight into how technological advances – the car, public dances, radio, and agricultural machines – forced drastic changes in the music.

While cars were initially very expensive, the introduction of the Ford Model T in 1924 put automobiles within reach of many, including farm families. Not just a novelty for rural communities, cars dramatically expanded the distances that could be easily covered and put towns and cities much more easily in reach.

“With the purchase of a car, new horizons opened. For the first time, a family living miles out in the countryside could easily travel to town – to shop, attend church and community events, and enjoy new entertainment possibilities.

It was no longer necessary for amusement to hitch up the horses and jostle over to a neighbor’s farmhouse, squeezing into a tiny parlor to hear an old fiddler saw out the same tunes again and again. The car was waiting in the barn to be cranked to a start and steered into town.” (86)

The increased mobility of the rural populations fed into a huge growth in demand for professional entertainment in the cities. Dance halls and pavilions in town could offer large spaces with the very best musicians and callers from afar. No longer based on community reciprocity like the kitchen sweats of the rural neighborhoods, these dance halls were strictly commercial affairs, seeking the hottest bands, fancy costumes, and entrance prices to match.

What came along with this rise of urban dance halls was more than just new places to dance and semi-professional musicians. It also saw the concomitant decline in the significance of amateur local musicians and an eroding age diversity in the attendants. Dance halls drew in people from communities quite far and wide, meaning that many there were relative strangers. Illicit drinking, fighting, and less wholesome behavior were much more common in the dance halls than the family parlors. As a result, children, the elderly, and women were more likely to avoid these spaces.

The radio, of course, brought the sounds of professional musicians and novel artists directly into the houses of rural populations and thereby presented a direct – and often unfavorable – comparison to local amateur musicians. As tastes for these professional musicians grew so did the desire for the homemade alternative decline.

Finally, the rise of agricultural machinery may have made farming faster and less arduous, but it also decreased the dependence of families on the collective labor of those around them. Whereas rural neighborhoods we once limited in the acreage they could work and still needed neighbors for many larger tasks, agricultural machinery allowed individual farmers to expand the size of their farm and rely far less on the help of others. Gradually this eroded the tight social fabric of the rural neighborhoods and turned collective music making from a social necessity to a mere nicety.

The broad brushstrokes of oldtime and fiddle music in the US before the advent of recording are well known, but the details and personal stories are equally thin. Farmhouse Fiddlers is a wonderful read for the interview quotes, the ethnographic analysis, the pictures and more. But above all it is one of the few ethnographies that goes beyond the general and brings the reader down to the individual lives of musicians in community, the roles the music played, and how that changed at the beginning of the 20th century. Fiddle music and dance clearly played a central role in communities across North America since the arrival of European immigrants. Farmhouse Fiddlers gives us a rare glimpse into how that actually looked in Midwest farming communities.