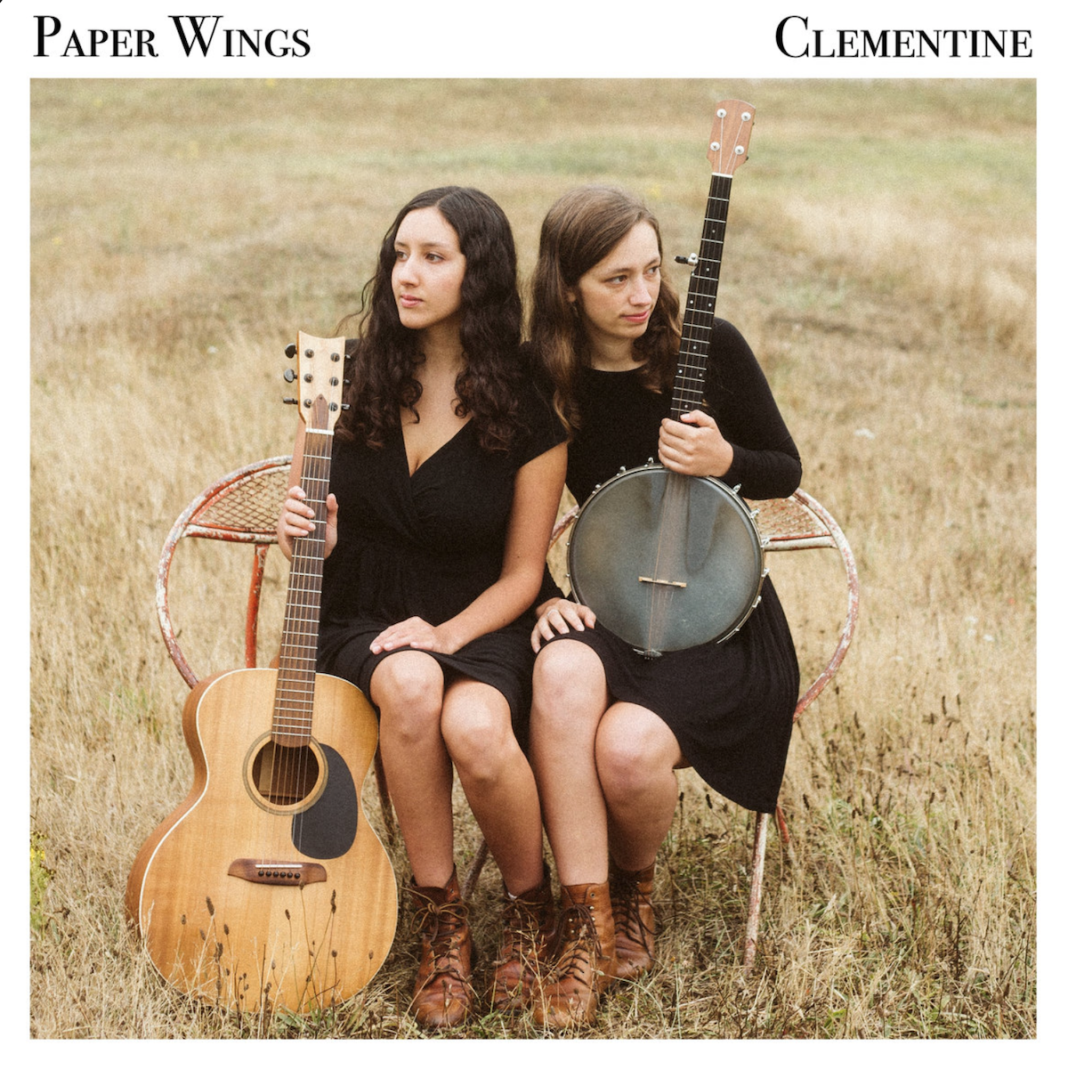 In May of this year the Paper Wings’ duo – Wilhelmina Frankzerda and Emily Mann – released their second album Clementine. Thirteen original tracks deeply influenced by the women’s experience in oldtime, we knew this album deserved the attention of the broader community. We spoke with Wilhelmina and Emily to find out more.

I hear tracks on the album – all originals – not just as beautiful, catchy songs, but as a dedication to deep songcraft. Compelling but subtle arrangements, surprising chords here and there, lyrics that tell a real story. Can you talk about how the two of you think about writing original songs? What does that partnership look like in the duo?

Wilhelmina: First of all, thank you so much for talking with us and for your thoughtful question. It really tickles us when folks tune in to the subtler details of our music. Many of our songs are written by Emily or me individually, but there is something special about performing the songs we have written together. We both put a lot of thought in to the lyrics, arrangements, and atmosphere of our songs. When writing together, we’ll usually sit down across from one another with our instruments and mess around humming lines or singing phrases until something strikes us. Sometimes we agonize over the smallest details, and sometimes songs come to us as if recalling a dream or memory- the whole goal being to tell a resonant story or create a rich atmosphere. It often feels very vulnerable like sharing streams of consciousness. It’s also a bit like entering a sort of dream state together where we watch snippets of lyrical and melodic ideas float by to ponder and sift through. It’s a very intimate experience and also incredibly therapeutic.

A few of the songs, such as Troubled Soul, Clementine and Dusty Eyes, use some less traditional non-diatonic harmonies, altered chords and inversions that add a modern edge. Was there any discussion among the two of you about those harmonic choices?

Wilhelmina:  Absolutely. We adore edgy harmonies and are always trying to work in chords that really make us feel something. Sometimes the emotions in a song aren’t meant to sound “pretty” or “perfect”. There’s something that feels more sexy and compelling about embracing harmonic tension sometimes. There are actually a lot of dark modal harmonies used in traditional music which was partly what drew me to oldtime music. We try not to confine ourselves to genre, so we let many different musical influences come out in our harmonic choices.

The whole album is also filled with really inventive and evocative vocal harmonies. Not just simple triad-based chordal harmonies, but more adventurous chord tones, contrary motion, and rhythmic variety. Can you talk about your approach to writing the vocal harmonies?

Wilhelmina: When in the process of arranging harmonies, we will usually try a bunch of different options and carefully choose which sort of chords we want to create with our voices depending on the meaning of the lyrics or the atmosphere we’re trying to create. There are so many choices when it comes to harmony and we love exploring until we find something that feels like us.

You describe yourselves as an ‘oldtime indie folk duo’. The music on the album obviously touches on a variety of genres such as oldtime, ballads, early country and ‘Americana’ more generally. I wonder how you two think about genres and your place within them?

Emily: I always find it hard to answer the question of genre with this band and “oldtime indie folk” is what came the most near to feeling right. Sure we both play a lot of oldtime music outside of this project and it definitely makes its way into our original material, but for the most part we’re writing outside of what would be considered traditional oldtime music. We also both like to listen to all sorts of other kinds of music and what we’re hearing surely makes its way into our writing as well. So we’re oldtime musicians and contemporary songwriters with some wide-ranging influences, and all of that mingles together in this space that we inhabit.

It seems obvious that the album was constructed as an album – a piece that makes sense as a cohesive whole, flowing from one song to the next. Given modern listening habits that don’t tend to consume music that way anymore, how did you decide to take that route?

Emily: You’re right that we envisioned the flow of the album as a whole. We put a lot of care into this collection of songs and how they fit together. I guess even if we make the assumption that most listeners will only listen to a track here and there and not the whole album, we still had to pick an order for the songs. So we constructed the album in the way that felt true to us, so there is at least the opportunity for the listener to hear it the way we hear it.

The collection of songs on Clementine were mostly written over the course of about a year and they are a snapshot of that time in both of our lives. There were other songs we wrote that year that didn’t fit as well in that picture, so they didn’t make it on the album.

At least in the oldtime community there’s a growing sense of rejuvenation emerging. Many groups with highly talented, younger musicians are putting out amazing music. How do the two of you view this wave in the community? Why do you think so many young musicians are turning to oldtime and other vernacular American musics as the focus of their creative attention?

Emily: I think that it’s true that there are a lot more young people playing oldtime music than there were in the last couple decades. I know that what drew me to oldtime music initially was the community aspect, and the chance to learn and play in a safe feeling group setting. I don’t think there are enough opportunities now days to find community and connection like that and it’s natural that people crave it. The more young folks join in, the more young folks will keep showing up. Also, there is something to looking into a circle of people and seeing some who look like you that helps you to feel as if you belong there too. There are big conversations happening in the scene and more and more folks are doing the laborious and righteous work of making oldtime music a safe/safer place for LGBTQ and BIPOC folks as well. It’s slow going but I think that we are moving toward broader ideals of inclusivity as the norm and I challenge us all to put a shoulder to that. I know I could always be a better ally and I’m doing my best to learn and be receptive, so that’s a challenge for me too!

What’s next for Paper Wings? Are there new songs in the works?

Emily: Yes! We’ve always got new songs in the works. A couple of months ago I moved to Nashville where Wilhelmina has been living for a few years now. So for the first time ever we are living in the same town and so have more chances to play and write together. It’s been wonderful! We’ve been playing little shows around town, dreaming up all kinds of projects for the future, and can sit down and write a song together any time we feel like it. We have lots of ideas in the works and are doing some recording this winter, so be on the look out for new music from us!

Paper Wings album Clementine can be found on their website.

We Came for the Fiddle Tunes, but Stayed for the Yodeling Cowboys: A Review of Texas Hillbillies