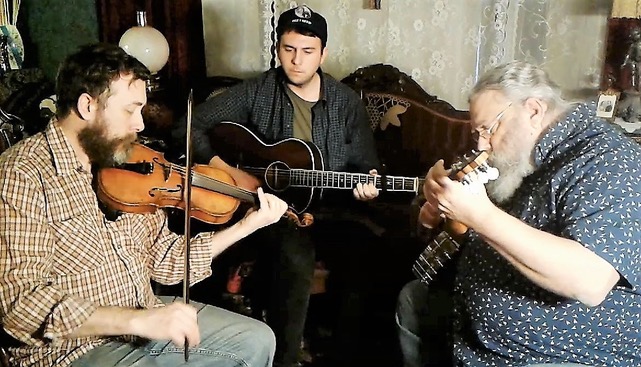 Paul Kirk is an Ohio-based fiddler and teacher who for many years has been posting videos of fun and often rare oldtime tunes through his Tune of the Week (TOTW). In his videos, Kirk shares the tunes as well as historical information about the sources. Kirk’s TOTW archive is a wonderful resource for people learning oldtime tunes. In this interview, he discusses his work and life in the oldtime community.

Why did you start Old-Time TOTW?
I wanted to share different, obscure, and unusual Old-Time fiddle tunes played in different settings on a regular basis. I also wanted to share history about the source fiddlers and where the tunes come from. I was frustrated with a lack of centralized, detailed information. You can find stuff here and there, but none of it is all together in one place. For some fiddlers, there wasn’t any information out there at all (such as many of the Oklahoma fiddlers featured by Marion Thede in The Fiddle Book).

Why is Old-Time TOTW important/what does it mean to you?
I want to share the music with others, but I also want to honor the source fiddlers. If it weren’t for them passing on the tunes, we probably wouldn’t be playing them. I like to let people know about some of the more unknown and under-represented fiddlers…women fiddlers, black fiddlers, for example. And there are so many great tunes that people just don’t play.

How do you learn the tunes?
I’ve learned some from friends, but my preferred method is learning them from the source recordings. Some details can be difficult to hear in them, though. For many tunes, there are no recordings that even exist that I know of. In those cases, I learn the tunes from the printed notation. Thede and Bayard are great sources for those. Learning tunes from dots is a bit like interpreting another language. You can’t just play the printed notes and expect it to sound like Old-Time. I read a tune until I feel I understand it and have it down pretty well. Then the music goes away and I keep playing the tune. That’s when it starts becoming music.

What are your sources for information about the tunes and fiddlers?
Andrew Kuntz’s Fiddler’s Companion and Traditional Tune Archive have been invaluable sources for information about tunes, but not all are listed, as that would be pretty impossible. For those, I make comparisons to other known tunes and discuss the title and other aspects of the tune. Larry Warren’s Slippery-Hill is an amazing resource for source recordings. There are some articles on the Internet featuring specific fiddlers, but I use Ancestry a lot for more personalized history. The families of the fiddlers have shared some amazing things. In some cases, I’ve gotten information and photos directly from descendants.

Why do you use such odd tunings?
I’m a big fan of low tunings because they really make the fiddle sing. I like to show people things that are different and cause them to think outside of the box. A lot of the old fiddlers tuned low. Tunings weren’t as standard as they are now, and were about intervals rather than absolute pitch based on A440. I’d hazard to guess that many of the early fiddlers didn’t even know what that was. And if they did, I think it hardly mattered. With electronic tuners, we’ve become so fixated on exact pitches. Modern Old-Time musicians are also used to categorizing tunes according to key (“D tunes,” “A tunes,” etc.) That really reinforces the thought in people’s minds that tunes must sound in a specific key. It really wasn’t like that in the old days. For what people now refer to as “A tunes” played in cross A, Isham Monday was tuned close to FCFC. Hiram Stamper was even lower at EBEB. They didn’t classify these tunes as “F tunes” and “E tunes.” They knew what intervals to tune to, and they just played the tunes.

What have been some of the greatest challenges you’ve faced doing Old-Time TOTW?
I want to make sure everything I present is as high-quality and accurate as possible. I like to include photos to make the videos more personal and interesting. It takes a long time to compile a short blurb about the fiddlers, especially for the more unknown/obscure ones. When I find new information, I like to have other sources to back it up, if possible. That all takes time. Finding tunes, choosing which ones to play, and then learning them takes time, too. We usually get a solid take to record after jamming on new tunes one time. Then I edit and put together the videos, which is also time consuming. I do very little editing with the sound. I like everything to sound natural.

You reached the one-year mark in late June 2018. What do you have planned for the next year of Old-Time TOTW?
I’d like to feature more obscure times and more of the under-represented fiddlers, like women fiddlers and black fiddlers. Everybody is part of the history. It’s not just about old white men, at least I don’t think it should be. I started a Facebook page for Old-Time TOTW (“Paul Kirk’s Old-Time TOTW“) so there can be discussions with people who follow it. They can ask me questions and request or suggest tunes. It’s also a good way to keep some of the older videos fresh in the mix. I think more interaction makes people feel more involved, too.

A lot of people have been requesting slowed down lessons of the tunes, especially ones that are obscure. I’d like to add that element, but that would really be a whole separate project born out of Old-Time TOTW. In order to successfully accomplish this, I’ve been thinking of adding a Patreon option. That way I can continue to devote more time an energy to the series, as well as having the ability to involve more people and add extra features to expand Old-Time TOTW.

I’d also like to add more standard G tunes and C tunes to the mix.

What have been the best/most memorable things about doing Old-Time TOTW?
I think it’s helped me learn tunes more quickly and efficiently. I listen to and focus on tunes in different ways now. I don’t just aim to learn the tunes simply to record them and then have them gone from my head the next day. My intention is to retain them, which I have been successful at doing. Part of that is so I can teach and play these tunes at jams and workshops when I travel. Retention of the tunes also adds to the lists of tunes I play. I feel that all the preparation I go through for each tune has helped me become a better fiddler. I enjoy working with Stephen Rapp (banjo) and Sean Fen (guitar) very much. They are pretty amazing. They don’t bat an eye when I mention a list of of 6 to 8 new tunes that I’d like to learn and record in two days. They also don’t mind the unusual keys and tunings I do; in fact, I think they really enjoy it. They’ll tackle anything.

The best part, though, has been getting these tunes out there and letting people know about them and the source fiddlers. In a way, those fiddlers seem like icons, but they really were just everyday people. They struggled. They worked hard. They had hard lives. But they brought people a lot of joy, and they still do through their music. It’s up to us to continue that part of the tradition. I’ve connected with descendants of some of the fidders, and that has been very emotional and special. They’ve shared personal stories and family photos. Their memories are being kept alive through this music and the telling of their stories.

African Americans in Oldtime: 10 Resources for Learning the History of the Music

So You Want to Learn the Mandolin: Online Resources for the Neophyte

Take it slow: tools to slow down recordings