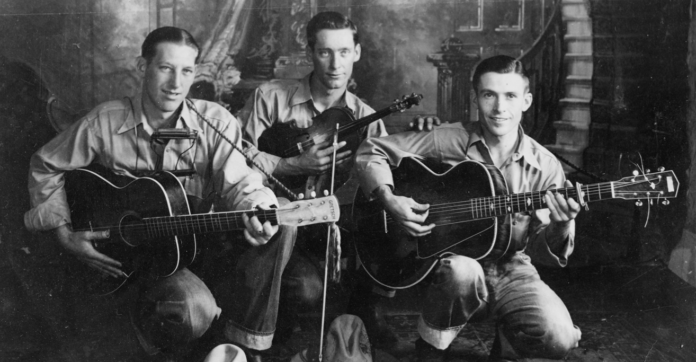 “I feel like calling Willard Hodgin the McGonagall of old-time music,” music historian Tony Russell writes. “William Topaz McGonagall of Dundee, Scotland (if you are not familiar with him), was one of the most prolific poets of the nineteenth century and is generally accounted as the worst. His verses were undisciplined in structure, tin-eared in rhythm, and full of plonking anticlimax. Hodgin was a match for him in every respect. But the Scotsman was at least a straightforward storyteller, whereas the American Bard’s tales were hectic journeys through a jungle of the imagination.”

Thus begins chapter 28 of Russell’s newest book, Rural Rhythm: The Story of Old-Time Country Music in 78 Records, in which Russell tells the grander story of old-time country music by focusing on the stories of specific 78-rpm records. Each of the 78 chapters is about one record, the song and its musicians. This makes Rural Rhythm a collection of short stories with recurring themes: the roles and limited opportunities for women and minorities; record company categories, bias and sales; influences from other music; the Great Depression’s effect on the industry; and the larger American history of rural populations shifting from farm to factory labor.

Few people are better positioned than Russell to know about previous and ongoing country music research. His nearly two-decade run as editor of Old Time Music magazine and his monumental discographical work, 2004’s Country Music Records: A Discography 1921-1942, have placed him in the center of a community of 78-rpm collectors, scholars and researchers that are writing the story of American traditional music. (His previous book, 2007’s Country Music Originals: The Legends and the Lost, is an equally fascinating and entertaining read.)

The tales in Rural Rhythm begin with John Carson’s 1923 solo fiddle and voice version of “Little Old Log Cabin in the Lane” and continue chronologically up to Bob Wills’s 1940 Western Swing classic “New San Antonio Rose,” thus covering the brief span of old-time country music’s 78-rpm recording popularity. The chapters range from best-selling 78s that few today would find of interest to now-cherished recordings that sold only a pitiful number of copies at the time. In each chapter, with charm, craft and dry wit, Russell shares a wealth of biographical, career, sales and discographical information along with informed speculation. He references related recordings, songs, publications, themes and historical events to suggest what the original consumer might have heard in these recordings.

Familiar bands like the the Carter Family, the Georgia Yellow Hammers, the Hill Billies, and The Nations Brothers make their appearance, but one of the real joys of this book is the abundance of far lesser known performers, such as Raney Van Vink, Alfred Meng, Bill Tuttle and Happy Bud Harrison. Through Russell’s skill, in this book we meet quite a sampling of the folk in folk music — like Willard Hodgin in chapter 28.

Russell follows his charming introduction of Hodgin with a quote from the recording, “A Red-Headed Widow Was the Cause of it All”:

“We met in the barnyard, and she says she cares,
But while we made love, we smelled the pig tails and the ears.”

Russell then goes on to describe the performance: “The instrumental setting for these hotchpotch narratives is a kind of stream-of-consciousness banjo playing, unstructured strumming with sudden slides to improbable chords. The instrument sounds like a tenor banjo, probably open-tuned. Hodges played as if he is self-taught and doesn’t care who knows it.”

Rural Rhythm benefits from the latest archival discoveries, previously unpublished interviews, unseen photos, and surprising amount of vintage newspaper accounts now accessible to tell the story of American traditional music through the ears and fingers of the people who played it and the people who listened to it at the time — making it all the easier for those of us who cherish the music to connect to it now.