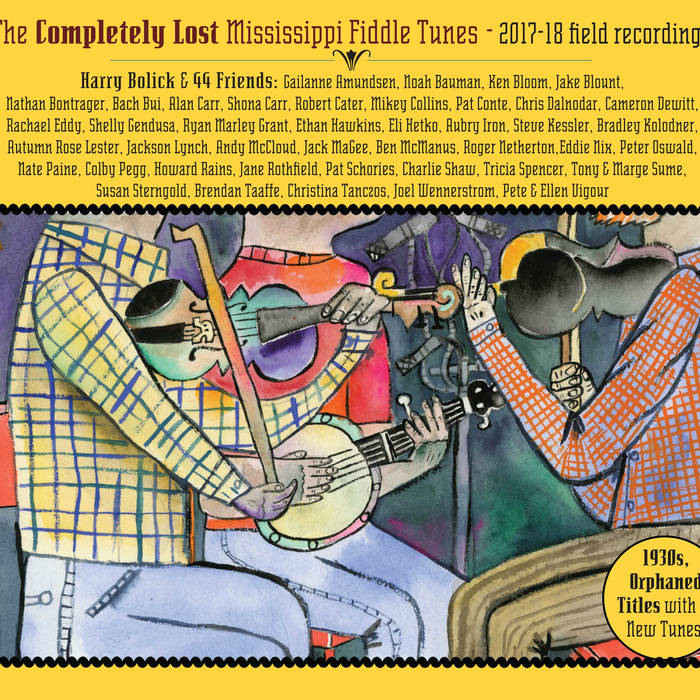 The album “The Completely Lost Mississippi Fiddle Tunes” by Harry Bolick & Friends is an album filled with Harry’s own tunes, written in the Mississippi style that he has studied for so long. The tunes are carefully arranged and you’ll have a great time listening to this album from the beginning to the end. But be aware, it’s not your ordinary old time album! It’s a well thought out concept that Harry has executed gracefully.

I often jokingly say that I like playing traditional music since I don’t have to write the music myself. It’s there, waiting, ready for anyone to reap, created by someone older and wiser than me. This is of course a lie. There are many extremely talented musicians writing music in the traditional style today, and they do it extremely well, creating the evergreens of tomorrow. And then there are those who go the extra mile.

Harry Bolick has spent the last 15 years researching and studying the old time music of Mississippi. He’s been digging through the archives, listening to records so bad that your ears almost starts to bleed. In addition to transcribing all of these tunes, he has learned to play many of the tunes exactly as they are played on the records. He once mentioned to me that it satisfies him in a spooky way, since it’s like playing music together with the dead.

During his research he also found tunes lost for those of us who are unlucky or, perhaps, lucky enough to not have spent the 1890s-1930s in Mississippi. Melodies of which the only trace is the names noted down by a field researcher or found in a local newspaper clipping about a fiddle contest. These are what Harry refers to as the ‘completely lost’ tunes.

So what do you do when you encounter such a trace? You could just leave it be, accept that it is lost to history in the same way as the inside jokes of the soldiers in the Civil War or the scream of the last dodo bird. But some people can’t do that; it would drive them mad. These completely lost tunes keep them awake at night, nagging at them like a fiddling poltergeist. “These tunes haunted me,” Harry Bolick notes in the album description. So he did the only right thing. He sat down and recreated the tunes based on only the title. And he did it well. “The Completely Lost Mississippi Tunes” is a fantastic album, although I recommend that you start with CD 2. I’ll let you know why in just a moment.

There are many wonderful albums out there, with newly written music that intrigues and with old music played with a new touch. And this is one of those few albums that sounds old fashioned, and at the same time keeps you on edge from the first to the last tune.

If you start listening from the beginning to the end the album consists of both gentle changes between different types of tunes and songs, as well as provoking changes of mood and feeling. There are songs with beautiful build-ups. There are tunes in which you expect something cliché to happen, but then it doesn’t. There are melodies that are played sloppily and out of tune, and intentionally so, and there are tunes that are provokingly crooked, without taking it to the extreme. And Harry and his 44 friends play them beautifully!

I decided to take notes while listening through the album for the first time, and I want to share a couple of them with you so that you get a hint of what to expect: “Almost Norwegian”, “Strange tune with slap bass”, “Lures the listener into making up the lyrics himself”, “Confusing, but proud”, and “Are those  fiddles untuned?!”. The song order is superb, and the last tune is chosen wisely, since it wants you to just start over from the beginning again.

When I first started listening to it, I thought that I had misunderstood something about the album. That these tunes weren’t at all completely lost. There were old recordings of them and Harry had just rounded the collection off with some self written tunes.

That’s not the case. The punchline of this wonderful album is that Harry and Pat Conte have taken some recordings of the tunes they wrote, put them through some kind of combined meat grinder and cement mixer, and made them sound like old, very old, field recordings. If you listen extremely carefully, you can hear that the playing somehow feels too modern, but the tracks on CD 1 still sound like they are recorded with Edison’s first phonograph, played as if they are being played by old farmers around the turn of the 20th century.

But it’s all fake. It fooled me, and it will probably fool many other people who haven’t read a review of the album beforehand. It’s rough listening, and you have to be some kind of a masochist to be able to work yourself through it in one take. CD 1 is what makes this album what it is. “Fake-lore” Harry calls it and it’s a perfectly engineered joke.

For my daily listening I’ll stick to CD 2, and there isn’t one tune on it that I don’t want to learn. All in all, this is an album very well worth the time, and it’s one that you can listen to both for the beautiful tunes and for the brilliant musicians.

You can find out more about the album on Harry Bolick’s website: http://www.harrybolick.com/recordings/completelylost

The tune book accompanying this album can be found at: http://www.harrybolick.com/images/stories/LostTunebook2018-v3.pdf

And if you can’t wait to listen to it in all its glory you can order a digital copy via BandCamp: https://harrybolick.bandcamp.com/album/the-completely-lost-mississippi-fiddle-tunes