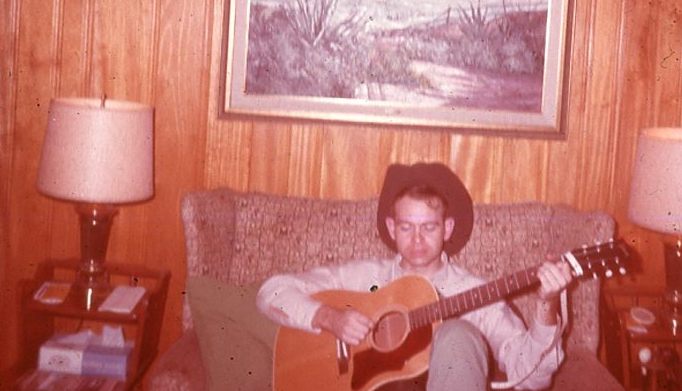 One thing I love about playing old-time music is that a good tune or a good session is a collaborative effort. Each individual plays a part in creating the overall sound. This is how the music functions and this is how life functions. Knowing the part we all play and playing that part well works for the benefit of the greater good. That sound. The one we live for. Whether there are just two, four, six, or a big old love jam. We listen and we work together. This is how we get that sound.

I’ve played guitar my whole life. Some of my first memories are strumming the open strings on my dad’s old Gibson. When I was five years old, my dad gave me my first guitar. He got it on a trip to Honduras and it was crudely handmade, apparently by prisoners, with giant friction peg tuners and would now be called a piece of folk art. Years later it would virtually disintegrate after so many hours of banging on the rusty wire strings. My dad was a fine guitar player and I learned to play by watching him. Although he gave up playing many years ago, he still has a keen ear and can tell me if my instrument is a few cents sharp or flat. He claims that I am a better guitar player than he ever was, but to me the memories of him singing and playing sound better than any sounds I can produce.

I was asked to give my thoughts on backing up the fiddle in old-time music. It might be assumed that you don’t need to be a great player to back up the fiddle properly, and in some senses that is true, but that’s certainly not the whole story. You’ve got to be a damn good musician to back up a fiddler, and by Frances Gumm, you’ve got to be consistent.

“The fiddler may be no good, but they’re always right.”

The guitar in American fiddle music is a foundational instrument. It is the bedrock on which the fiddler builds in the air their glorious Sagrada Familia or glittering Watts Towers. Therefore, the primary concern of the guitar player is rhythm. One can have music without melody, but one cannot have music without rhythm. Thus the time of the guitarist is paramount. Being the bedrock of this music is an important job and with great power comes great responsibility. Sadly, this often means that the guitar player must shoulder the burden of the success or failure of a given tune not only through their timing but also through their chord choice. How many times have we guitar players played a tune only to be told by the fiddler at the end, “Those aren’t the chords I would choose.”

I have played traditional music to greater or lesser degrees throughout my life, but I learned a lot about chords from my partner in music, art, and life, Tricia Spencer. Not only is Tricia a fine guitarist, but she also has a strong chord sense developed out of her seconding fiddle style. Although we don’t agree on chords one hundred percent of the time, we do agree on one thing with absolute certainty: less is more.

It is therefore the responsibility of the guitarist to inquire beforehand about any anomalies, odd chords, or hitches in a tune before it begins. Sometimes a fiddler cannot communicate this information due to a lack of understanding of the underlying structure of a given piece. That is when the guitar player must use their eyes and, of course, their ears to find clues to the chords. Does the fiddler’s face tic at the sound of a certain chord? Does the fiddler wobble or sound uncertain during a certain chord movement? Above all, does the humble guitar player become the victim of the dreaded “stink-eye” when they make a chord choice? For this, Athens, GA guitar player Nancy Hartness has constructed small phylacteries, appropriately called “Stink-eyes,” to ward off the mal ojo of the begrudged fiddler. Other than these quaint charms, the only other known remedy is the right chord.

When backing up the fiddle, the boom-chuck is the guitar player’s best friend. The big boom and the light chuck drive the fiddle, but between the two there is a subtle dead space. It should be noted that when playing with a bass, this is flipped and the chuck becomes prominent, as the bass player now drives much of the boom, but the dead space is still there.

Music is like painting, the lines are the melody and the colors are the chords. Too many colors mixed together dilute the power and vibrancy of the images and muddy the lines. Strong, clear colors enhance the image and give focus to the lines of the drawing. This is why, when playing a tune it is wise to use the simplest of pallets. The I chord, the IV chord, and the V chord are the groundwork for any and all tunes. Others should be added sparingly and with care.

Music is like a soup. Too many spices can overwhelm the palate. Careful combinations brings out subtlety and rich flavor.

My good friend David Bragger of the Old-Time Tiki Parlour once said to me, “There are no minor chords in old-time music, except when there are.” This is true of all things in back-up guitar; there are clear rules, but rules are made to be broken. Knowing when to break them is the key. What are the rules? They are simple, play the boom-chuck, play the down stroke, use the I, the IV, and the V (and the II chord when called upon.) Minor chords, seven chords, up strokes, pull-offs, suspended and diminished chords: these are all elements of what might be termed “illegal guitar” in old-time, but used with care and in the right situations, can be useful. Knowing what style you are playing in is key to this. Understanding the regional differences across the country is paramount to understanding what style is being played. The only way to understand the regional styles is to listen, listen often, and listen carefully.

The old-time session is a microcosm of a functional society. Each member doing their part for the greater good of the collective sound. That’s why playing our music is so important, because we are expressing what we believe to be true about society by working together to create the best music we can in a given moment.

You, dear reader, may or may not agree with what I have said here. You may think it to be a bunch of hooey, but I believe we make the world a better place with our music. It is a renewable resource. If you can get rid of your electronic tuner and their batteries, there is very little waste. Our work as guitar players provide the cornerstone for the music. Our job is to be solid. Our job is to be the foundation.