Home Album Review We Came for the Fiddle Tunes, but Stayed for the Yodeling Cowboys:... 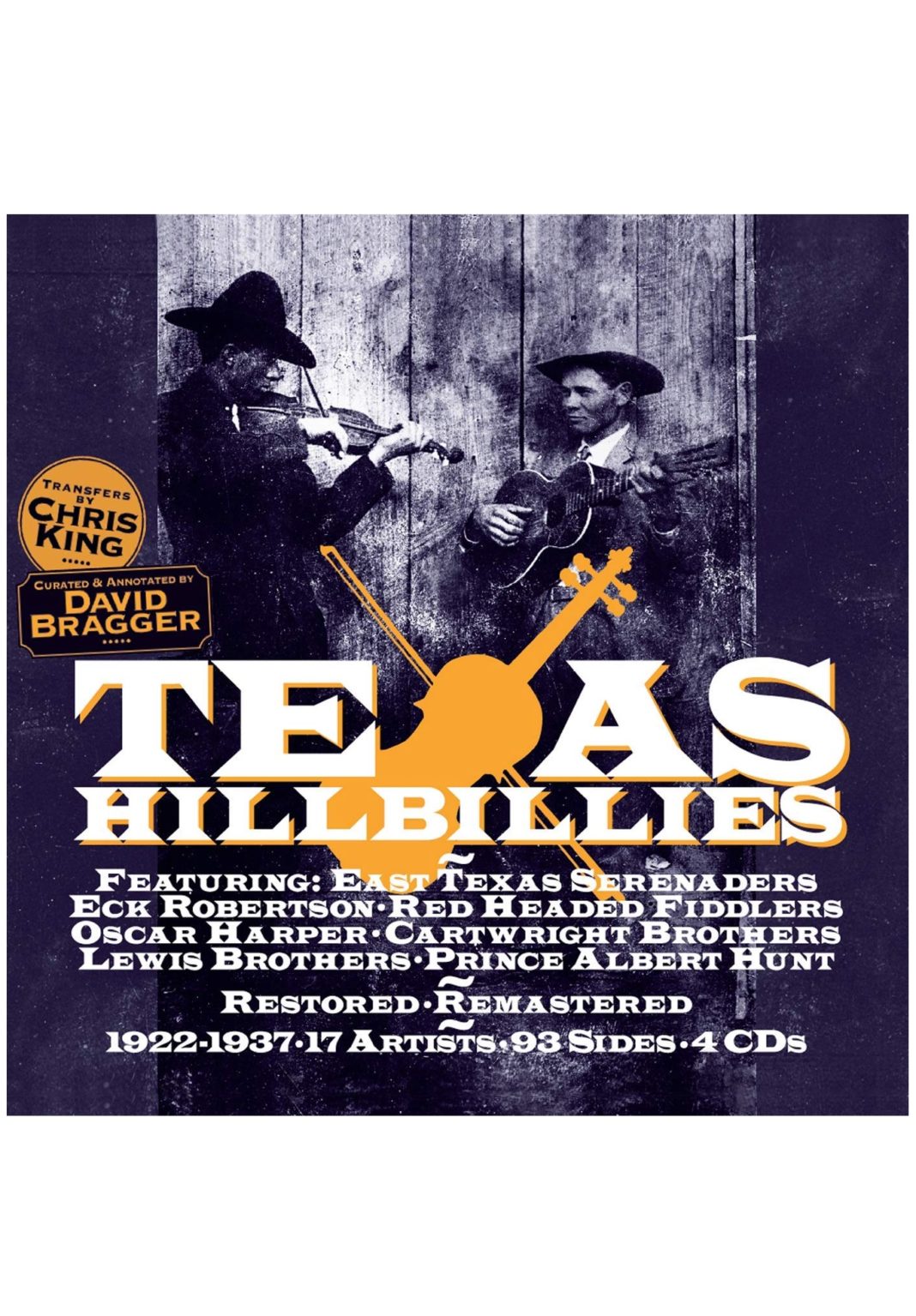 In his 1962 travelogue Travels with Charley, John Steinbeck reverently ascribes a religious mystique to the Lone Star State. “And this is true,” Steinbeck writes, “to the extent that people either passionately love Texas or passionately hate it and, as in other religions, few people dare to inspect it for fear of losing their bearings in mystery or paradox.” Chris King and David Bragger dared, and joined an inspection of Texas with other topics known to produce polarization of religious intensity: Old Time Music and ancient recording technology. Messrs. King and Bragger emerged with bearings intact, and Texas Hillbillies supplies the evidence.

In purely objective terms, Texas Hillbillies is a collection of ninety-three recordings of Texas string band music from the 1920s and 30s. The tracks are drawn from one or both sides of fifty-two 78 RPM records. The records themselves were selected from among three private collections, transferred, and remastered.

This reviewer approached Texas Hillbillies with elevated cynicism. My affinity for modernity impels me to scowl at any recording technology predating the Hybrid Log-Gamma standard. Isn’t listening to a 90-year-old recording comparable, on some level, to having dental work done? Further, I mildly resented being asked to believe that, by the title’s insinuation, Texas had spawned hillbilly music at some point in its history. As a devotee of Dallas throughout each of its fourteen seasons, I was fairly certain that, by both anthropogeographic and physiographic measures, the hills of Texas are not of the Billie habitat variety. King and Bragger’s compilation dispenses with both of these objections handily.

Firstly, contrary to initial expectations, the audio quality of the majority of tracks in this collection is excellent. Through Texas Hillbillies, Grammy Award-winning sound engineer and record collector Chris King demonstrates remarkable mastery in preservation and remastering. With minimal exceptions, the tracks are nearly pristine and devoid of the kinds of imperfections and artifacts that tend to render early 20th century recordings unenjoyable by anyone other than the hopelessly nostalgic.

Secondly, the sounds and rhythms that resonate through this collection will almost certainly satisfy anyone in search of Old-Time authenticity. Banjo players and fiddlers with Appalachian repertoires will undoubtedly discover new, and perhaps distinctly Texan, interpretations of familiar tunes. The aforementioned impressive recording quality allows for the study of the intricacies and nuances of many of these tunes without straining the ear.

The Old Time Tiki Parlour’s musician, scholar, teacher, and Old Time community fixture, David Bragger is credited with annotation and curation. The tracks seem to be arranged to transport the listener through various archetypal scenes of the golden west. In one moment, a cotillion ballroom. In the next, perhaps a patent medicine show or silent movie theater. Inevitably, we find ourselves following a cowpoke in a 10-gallon hat as he melodically cajoles his doggies along the trail. For the willing listener, this immersion might only be broken by the necessity of changing CDs or the singular, bizarre, racially-charged diatribe directed at the devil. The liner notes convey Bragger’s passion for the music and provide a modicum of historical background to the tracks. Anyone looking for a comprehensive biographical treatment of W.A. Hinton will be disappointed, but I found that Bragger struck an appropriate balance in the annotations: The reader is equipped with just enough historical context and analysis to contribute to an enhanced listening experience without being bored.

This is not a collection for anyone with narrow tastes. The diversity of styles found here is broad, encompassing a wide range of rags, cautionary dirges, waltzes, and ballads. Don’t look to this collection in an attempt to distill a unifying theme across Texas string band music either. Even so, Texas Hillbillies is liable to expand the listeners’ musical horizons. This reviewer was won over by the fiddling of AC “Eck” Robertson, The East Texas Serenaders, and the Red Headed Fiddlers. Unexpectedly though, I gradually caught myself gravitating to the cowboy ballads of The Cartwright Brothers. I’m concerned that ‘cowpuncher’ has become a permanent part of my vocabulary now, but I’m pretty sure it was worth it.